As hundreds of thousands of people partied in the streets of west London last weekend, police tried to spoil the fun with almost 1,000 arrests.

It was part of their annual clampdown around the Notting Hill Carnival on Sunday and Bank Holiday Monday—a mass celebration of multiculturalism that cops hate.

The police tried to intimidate people with house raids leading to 686 “preemptive arrests” in the run-up to the event.

At Carnival itself the Met put on its friendly public face, as videos of dancing cops circulated on social media. But by 10pm on Monday night they had arrested a further 313 people.

Riots vans and kitted-out cops lurked in the back streets as officers used the racist stop and search policy.

The shadow of the Grenfell Tower disaster hung over the Carnival.

Mary Weale, the Tory councillor responsible for Carnival, said, “This year’s Notting Hill Carnival was different to any other, the Grenfell Tower fire was something that we all thought about.”

But it was Tory-run Kensington and Chelsea council, its housing bosses and the government that caused the conditions that led to blaze.

They continue to treat the survivors and residents of the Lancaster West estate with utter contempt.

Festival-goers responded with anger and defiance as well as grief.

Graffiti reading “Justice for Grenfell” and “Never forget” daubed the walls around the parade and posters were up in the windows of houses on Ladbroke Grove.

At 3pm on Sunday the music stopped playing as people held three minutes silence to demand justice for the dead and survivors of the blaze.

He told Socialist Worker, “For me this is like a pilgrimage of the poor, it’s the same people out here who were in the tower.

“The public inquiry might not lead to much but you can tell that people are defiant, and that they felt compelled to come.”

The parade on Sunday saw dozens of floats, many from local community groups, loop round the streets from Ladbroke Grove.

LMHR teamed up with the Smokey Joe Roadshow and the RMT transport workers’ union to put on a float.

Around 100 young people, black and white, danced behind it wearing LMHR T-shirts.

Simon Samaki told Socialist Worker, “The music coming out of Smokey Joe is great, I love the idea of Love Music Hate Racism.

“We have sent out a powerful message that we shouldn’t move against each other—and this is the best answer.”

Every year the Tories and cops try to scare people away from Carnival and talk of moving it.

From the solidarity with Grenfell to working class and black people taking over the streets, it represents everything the police stand against.

As well as being fun, the Carnival’s resilience is a blow against their hypocrisy. 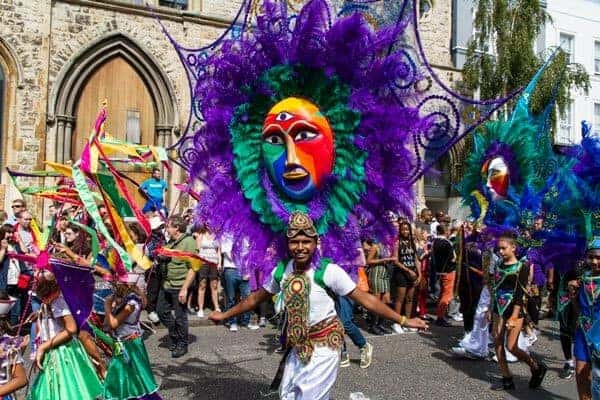 Let’s party against the racists at Notting Hill Carnival