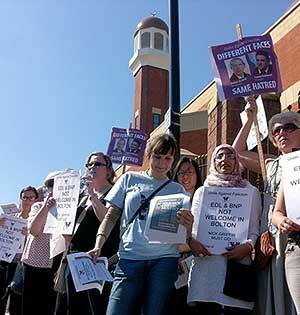 Racists from the English Defence League (EDL) failed to disrupt the Goals for Gaza charity events held in Bolton and Luton last Monday.

The EDL tried to stir up race hatred at the charity football matches that were organised by the Ummah Foundation to raise money for Palestine. Unite Against Fascism (UAF) called counter?protests to oppose them.

The day was a failure for the racists.

In Luton, 30 Nazis were contained by police. They chanted racist abuse, but their own football event was cancelled while the Goals for Gaza event went ahead.

The UAF counter protest in Bolton was 100 mainly local people.

The racist EDL bussed around 120 to 150 fascists for their event.

But it happened miles out of town, in Farnworth Park, as the local anti?racist majority showed the EDL and British National Party that they are not welcome in Bolton

Anti-racists organise after attack on mosque in Essex