This article is over 12 years, 1 months old
The racist campaign against the Harrow mosque in north west London suffered another humiliating defeat last Sunday as hundreds of anti-fascists came out to defend the Muslim community.
Downloading PDF. Please wait...
Tuesday 15 December 2009

The racist campaign against the Harrow mosque in north west London suffered another humiliating defeat last Sunday as hundreds of anti-fascists came out to defend the Muslim community.

The Stop the Islamification of Europe (SIOE) group only managed to turn out around 15 people at the height of the protest.

They were heavily outnumbered by the lively and loud demonstration organised by Unite Against Fascism (UAF).

An English Defence League organiser was there, along with a few members, but left soon after arriving.

The UAF anti-fascist protests saw trade unionists, students and local people turn out to stand united against the racists.

The police had courted leaders at the mosque and together they worked hard to stop Muslims going on the protest.

While there were not the thousands of young Muslims there were in September, when the group first came to Harrow, many still joined in.

Abdul and Di, local school students, came with friends to the protest.

Abdul said, “The imam told us not to come here and that the police will defend the mosque for us. But we can’t trust the police – we have to do this for ourselves.”

Di agreed. She said, “Last time we showed them they can’t come back. Now there are only ten of them. We have won.”

The UAF protest also had local Jewish representatives speak from the platform.

When the racists took out Israeli flags, the local rabbi was outraged.

SIOE have now said they will not return to Harrow and the message that racists and fascists are not welcome in the city is ringing in their ears.

The result is yet another blow to the BNP, who believed a low turn out would secure them victory.

But activists organised several leafleting teams and ensured every household in the ward received a “don’t vote Nazi” leaflet.

The celebrations continued on Friday with a Love Music Hate Racism gig that sent a clear message – the fascist BNP aren’t welcome in Hastings.

The BNP lost a council seat in Nuneaton to Labour last week in a local by-election. The Nazis had held the seat for 17 months. 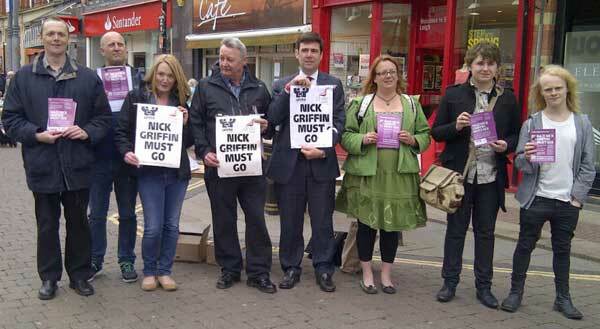