Thousands of disability campaigners flocked to city centres around Britain last Saturday as part of the latest Hardest Hit day of action.

Protesters were angry at the Tory attacks on the disability living allowance, employment grants and the removal of benefits from disabled people deemed “fit to work”.

Sasha Callaghan was at the 1,000-strong protest in Edinburgh. “People are very angry, and very determined. Now we need to step this up. We have a big fight ahead,” she told Socialist Worker.

Several of the protests, including those in Nottingham and Edinburgh, also linked up with the city centre occupations.

Carol Mew, director of Lewisham Disability Coalition, was at the London rally. “We’re struggling to keep up with benefit tribunals,” she told Socialist Worker.

“No one in government is looking at the cumulative effects on people. That’s why we are the hardest hit.

“They want to cut 20 percent of claimants off disability benefits. This is a clear ploy to just cut benefits, no matter what people need.”

The government has threatened the disability living allowance (DLA) and employment and support allowance (ESA). This is a drive to cut some

£9 billion from disabled people and their families over the next four years. This is in addition to local authority service cuts, which many rely on.

Raj Gill, from West London, was also at the London protest. “People are without employment and without any likelihood of getting employment,” he said. “For benefits to be cut is another stressful situation for people.

“They could cut the war budget and bankers’ bonuses instead, not the most vulnerable in society.”

TUC general secretary Brendan Barber sent a message of support to the rallies, and called on people to support the 30 November strikes.

And some Labour politicians, such as Scottish Labour leader Iain Grey in Edinburgh, were heckled for their attacks on welfare while in office.

Shockingly, some disabled people felt too frightened to come on the protests. They feared that someone from the department for work and pensions or Atos, the firm that conducts work capability assessments, would see them there and use it as an excuse to remove their benefits.

The weak and nasty coalition government thought that attacking disabled people would be easy. But they were wrong.

Thanks to Steve West 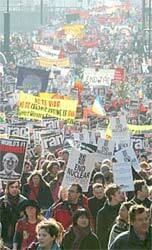