This article is over 15 years, 7 months old
The failure of employers to guarantee secure pensions for rail workers could see the biggest strike in the industry since the General Strike of 1926.
By Matthew Cookson
Downloading PDF. Please wait...
Saturday 20 May 2006

The failure of employers to guarantee secure pensions for rail workers could see the biggest strike in the industry since the General Strike of 1926.

Tens of thousands of rail workers were to begin balloting for strike action on Wednesday of this week to defend their pensions. As in many other industries, workers’ pension rights are under attack.

A number of employers are planning to increase employee pension contributions and close pension schemes to new workers.

The unions involved in the campaign are RMT, TSSA, Aslef and the CSEU/Amicus confederation.

They have been demanding that the employers commit to ensuring that the Railway Pensions Scheme remains open to all employees, cap employee contributions to a reasonable level, maintain benefits and streamline the 100 sections created by the fragmentation of privatisation.

Because they have not received a satisfactory reply, the RMT and TSSA have said they will ballot all their members on the railways and its infrastructure.

Unfortunately, despite the unions talking of unity, the Aslef train drivers’ union will not be balloting in every company, as it claims that it has had “acceptable” replies from a number of companies.

This has confused and angered many Aslef members.

The big turnouts at campaign meetings organised by the unions around the country show the desire for action over this issue.

An RMT member at Stonebridge Park depot in London told Socialist Worker, “Pensions are a very big concern for people. Most of the guys working here are between 30 and 50. People are expecting strikes over pensions.

“We have seen our pay and conditions eroded, and now management want to raise our pension contributions. These increases will cancel out any pay rise we get. This means that some people may pull out of the pension scheme.

“If it is also closed to new members the schemes will begin to dry up and those left in will have to find more money to sort it out. Everyone knows that the union is pushing for us, and management are pushing against us.”

A Merseyrail worker told Socialist Worker, “At a meeting of the unions in Liverpool last week there was a lot of anger towards the Aslef officials for the union accepting agreements with some of the companies, particularly from Aslef members themselves.

“People are talking about the attack on pensions being the last straw and saying if we can’t fight on this what can we fight on. People are up for action. They see it as a fight for our future, and that of future workers.”

An Aslef member in Kent said, “People are really concerned that we may not be balloted.

“We don’t want to be in a position where everyone else is out and we’re not after all the talk of the unions sticking together and seeing this dispute through.”

The ballot is set to end in the first week of June, with strikes beginning soon after that if there is no movement from management. The unions also want to put pressure on the government to resolve the issue.

BBC unions have delayed plans to ballot their 14,000 members at the corporation over the closure of the final salary pension scheme and other pension attacks after management agreed to talks. 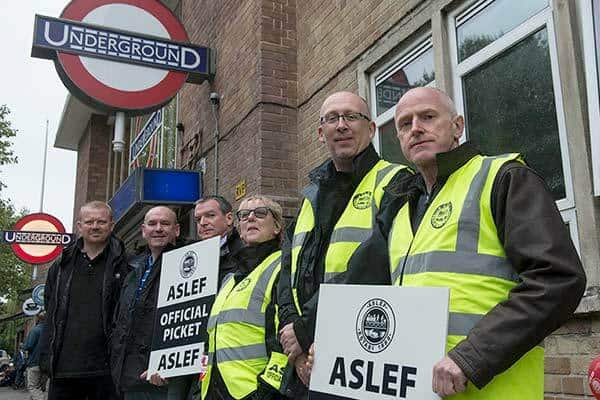