This article is over 17 years, 10 months old
Defend Farringdon Six TUBE WORKERS on a privatised part of London Underground were set to strike on Friday this week over the sacking of six colleagues. Metronet, the private company now responsible for two thirds of the tube track, sacked the six infrastructure workers after it found empty beer cans in a cabin near Farringdon station.
Downloading PDF. Please wait...
Saturday 13 March 2004

TUBE WORKERS on a privatised part of London Underground were set to strike on Friday this week over the sacking of six colleagues. Metronet, the private company now responsible for two thirds of the tube track, sacked the six infrastructure workers after it found empty beer cans in a cabin near Farringdon station.

The company has provided absolutely no evidence that the men were drinking on duty or even knew the alcohol was there. The Farringdon Six’s union, the RMT, has identified 32 major flaws in the disciplinary hearing that sacked them. One telling fact is that among those sacked were all the workers who had previously put in a grievance against their manager.

Activists on London Underground were this week building support for the action on Metronet, and warning that safety is compromised when vital track work isn’t done- such as when there’s a strike.

The new issue of Across the Tracks, the paper for rank and file rail workers, is out now. It has articles on the RMT’s expulsion from the Labour Party, the tragedy in Cumbria, the Farringdon Six, trade unions and Respect, and much more. Order your copy-phone 07949 228 234 or e-mail [email protected]

TRANSPORT WORKERS in the RMT and Amicus unions on the Tyne & Wear Metro have hit their bosses with two 24-hour strikes. Bosses have gone back on a promise to reduce the working week from 37 to 35 hours as part of the 2002 pay deal. Workers also struck for one day in January.

The strikes lasted from 7pm on Friday to 7pm on Saturday and from 7pm on Sunday to 7pm on Monday. Metro operator Nexus refused to open the service on Saturday, and closed down the Sunderland line from 2pm on Sunday. RMT regional organiser Stan Herschel says, ‘This is an act of desperation by a morally bankrupt management. In effect, come 7pm on each day in question my members are being locked out. Sending them home when they could be reducing the inconvenience to the travelling public beggars belief.’

THE RMT union was set to announce a strike ballot on Thursday of this week of 3,000 members working for rail infrastructure company Jarvis over their future terms and conditions as they are handed over to Network Rail. The transfer is part of Network Rail’s plan to bring maintenance work on the railway back in house. That is a welcome, if small, move towards the complete renationalisation of the industry.

‘But it is being accompanied by threats to our conditions,’ says Bill Rawcliffe, RMT branch secretary in York. ‘They are refusing to undertake that our terms and conditions will be protected under the transfer. And we fear job losses because Network Rail have already slashed posts. What we want is renationalisation and investment, not attacks through the back door.’

A railway worker was killed while carrying out routine maintenance near Sleaford last week. He was employed by Mowlem. 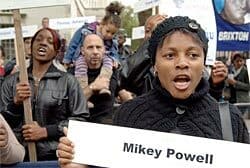