Rank and file have guts for victory

This article is over 20 years, 11 months old
'This dispute is part of our revenge' An unofficial rank and file strike by about 3,000 postal workers in north west England broke the anti-union laws and forced Royal Mail management into a humiliating retreat this week.
By Charlie Kimber
Downloading PDF. Please wait...
Saturday 27 January 2001

‘This dispute is part of our revenge’

An unofficial rank and file strike by about 3,000 postal workers in north west England broke the anti-union laws and forced Royal Mail management into a humiliating retreat this week.

The week-long action is the latest victory for postal workers against an increasingly frustrated management. It was very militant, involved mass meetings and hundreds of pickets, and shared some of the same mood as recent anti-capitalist protests. It helped fuel a sense on Merseyside that workers’ resistance is on the rise. Strikers also confronted and overcame the cowardice of their own national CWU union leaders.

The strike centred on Liverpool, where 2,000 workers struck. The key solidarity strikes came at Crewe, where 600 were out, and in Warrington Railnet, which moves the post on and off the trains. When Crewe struck, Congleton and eight other offices also stopped over refusal to handle Crewe’s rerouted mail.

The mood on the picket lines in Liverpool last week was combative. Delivery worker Dave Patterson told Socialist Worker, ‘I’m fed up with my boss, fed up with the bosses nationally, and I’m fed up with bloody New Labour for always listening to these bosses. ‘This dispute is part of our revenge.’

At one point pickets were so incensed by managers driving vehicles at high speed though picket lines that they blocked the road with railway sleepers and a concrete bollard. Strikers at another picket line mocked managers and the Post Office’s new corporate name by singing (to the tune of ‘Consider Yourself’), ‘Consignia yourself on strike, Consignia yourself part of the union.’

The strike began from the initiative of rank and file workers and was spread by rank and file solidarity. The action started on Monday of last week when a group of workers sat in at Liverpool’s main office, Copperas Hill. The spark was the suspension of part timer Gary Reitdyk for allegedly verbally abusing a manager.

But the real reason was years of bullying by managers. Post Office bosses are driving the workforce harder and harder to force up profits. If persuasion fails they frequently turn to swearing, threats of the sack and even violence. If a manager does this they generally get away with it. If a worker does it they are certain to be disciplined.

Other postal workers instantly understood the issue at Copperas Hill. All 20 delivery offices in Liverpool came out as soon as Copperas Hill stopped. Then the big processing centre at Crewe stopped because it refused to handle Liverpool work.

As the pressure grew on management, the CWU national officials threw them a lifeline. They faxed branches throughout Britain, suggesting there was a deal between the head offices of the union and Royal Mail. This was an open invitation to sort Liverpool’s mail. In fact, a mass meting of 700 Liverpool postal workers had just unanimously rejected a deal. The Merseyside CWU committee told the rest of the country what was happening and the solidarity held firm.

By last weekend the management conceded on all the central issues of the strike. Gary Reitdyk will only receive ‘counselling’, not a disciplinary hearing, over his alleged offence. There will be an appeal involving national CWU officials in another disputed case.

There will also be a full review of industrial relations, with the Merseyside branch able to input its demands over harassment. Jane Loftus, a member of Merseyside CWU’s committee, told Socialist Worker, ‘The strike has involved more people in the union, built our organisation and humbled the management.’

‘We’ve had enough of bigoted bullies’

In the last year, says the Merseyside CWU union, 16 postal workers have been disciplined unfairly in their area alone. At Royal Mail offices across Britain workers have been sacked for ‘answering back’ or ‘failing to follow instructions’.

However, a Merseyside manager who was found guilty of physical and verbal abuse was simply moved to a different office. Tony Williams, the Merseyside CWU branch chair, told Socialist Worker, ‘This strike was about dignity, fairness and justice.’ The strike has freed dozens of workers to talk about the harassment and intimidation.

One of the (disgracefully few) black workers at Copperas Hill told Socialist Worker, ‘On the fourth day I was here a manager said to me, ‘Start shifting your arse or get back to your ghetto in Toxteth.’ I couldn’t believe what he said, but it was just my word against his-I didn’t complain. ‘Now I’d go straight to the union.’

All the strikes mentioned on this page are illegal. They had very democratic meetings to launch them but no postal ballots, no seven days notice to management, no handing over of the names of strikers as the law demands.

Yet the Post Office has not dared to drag people before the courts. Management is not soft-it is scared. Postal workers have stood together and refused to handle mail from striking offices in all the recent big strikes. This makes it impossible for Royal Mail to isolate a group of strikers.

Management in Liverpool arrogantly refused any concessions until other offices walked out. Then the deal suddenly appeared. At some point Post Office management (and the government which stands behind them) is likely to attempt a full scale assault on unofficial strikes. The latest issue of the Post Office bosses’ paper, Courier, talks of the need to ‘halt the rising tide of industrial action’.

The network of rank and file militancy which has stood the test of the recent strikes urgently needs to be strengthened. Links also need to be built with other trade unionists and campaigners by supporting their struggles. CWU members must also build on the political challenge to New Labour’s pro-business polices. This process began at last year’s union conference.

Post Worker (a rank and file paper written by postal workers) can act as a very useful forum for this process. Several CWU branches have already made bulk orders. Phone 0958 478 631 to get your copies.

A series of other victorious strikes last week showed the mood in the post:

BRISTOL: A four-day strike by up to 150 delivery workers last week forced Royal Mail to back off over slashing overtime payments. Managers had suddenly announced that a previous payment for sorting mail for colleagues who are sick or on holiday would be withdrawn. The strike left half a million letters undelivered. Management tried to defeat the strike by delivering mail themselves. But they couldn’t cope and gave in on the central issues of the strike.

IPSWICH: Around 400 workers struck last week over aggressive management. After a few hours they returned victorious. Apart from national strikes, this is the first walkout at Ipswich since the 1920s. ‘If we’d known it was so easy to win we’d have done it years ago,’ a CWU member told Socialist Worker.

STOCKPORT: Around 250 workers struck on Tuesday of last week in Stockport, near Manchester. A CWU member says, ‘We were angered by the attitude of a manager and wanted the issue sorted. We don’t see why we should be hassled and bullied. We were out for two hours and the issue is now being resolved, and we will not have money deducted for the strike. Good result.’

More than 1,000 IT workers set to strike at Fujitsu 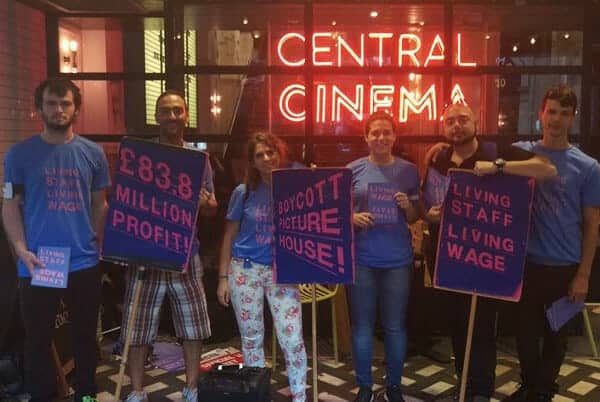