JOHN O’ FARRELL’S lead article in the Guardian’s education supplement on Tuesday of last week highlighted the campaign for a secondary school in Lambeth, south London. It showed how people who had hoped to win a decent school have been offered a business-based City Academy.

The article illustrates very concretely the growing alienation and bitter disappointment that so many loyal Labour supporters feel. After all, John has been the personification of New Labour both nationally, when he stood as a parliamentary candidate at the last election, and locally in the very large, angry meetings which took place in the borough when the notion of a City Academy was first proposed.

At those meetings members of the Socialist Alliance argued against the establishment of the privately financed academy. They were supported from the floor, but criticised by a number of the committee members, including John.

As he describes very well in his article, they believed that the fact that they were middle class, loyal New Labour supporters meant that they could persuade their friends in power to give them the non-selective, mixed comprehensive that all the parents wanted.

This strategy is now in tatters. This is not just because Estelle Morris won’t listen, but also because New Labour’s big political agenda is the privatisation of education and all public services. The campaign needs a new strategy of taking on the government. To date 1,000 parents have signed the petition. If we organise on the streets, on the estates and through the education unions we could get 10,000 people to sign.

We need public shows of opposition like the forthcoming protest outside the Labour Party conference, and to link up with other campaigns against privatisation across the country. We need to use the language of struggle that can make New Labour listen.

It is time we had one party

AS A member of the Socialist Labour Party on Merseyside, I had always hoped for “one party” of the left to contest the general election. This was not to be. I was sad to see that in about 50 seats the Socialist Alliance and my party both stood candidates and obviously split the left vote. The end result was some deposits being lost and, more importantly, the electorate being confused by two candidates representing the left.

As the SLP candidate in St Helens North, it was said to me on more than one occasion, “It’s not worth voting for you because you can’t even agree among yourselves.” How much public support did we lose by our disunity?

When Arthur Scargill held talks on forming a new party in 1995-6 the idea was that we should leave all our baggage behind. I left the Labour Party and many others did likewise from other political parties. Surely this was the only way forward at that time, and is the avenue to go down once again.

I fear that failure to come together as “one party” very soon will mean that in future generations the left will still be counting votes in hundreds, as now. We need to wise up. The people deserve better from us. Leaders, get round the table.

YOUR ARTICLE “IMF Challenged On Streets Of Colombia” (Socialist Worker 16 June) mentions “left wing guerrillas”. It should be said the guerrilla movement does not have a left ideology. It has come about after the destruction of agriculture by the US air force, part of Plan Colombia.

The Colombian government has accepted imports of cheap food from America, resulting in their own farmers being put out of business. To make a living they grow the only cash crop which has a ready market-coca. American warplanes have sprayed agricultural areas with defoliants, destroying not only the coca, but other crops as well.

Because they can make a fast buck out of the sale of cocaine, the drug barons have financed the supply of arms to the farmers, hence the growth of the guerrilla movement.

The growth of drug crops to replace inability to grow food is an increasing result of globalisation. Opium poppies are grown in vast quantities in Pakistan. There is a danger that this kind of thing could happen in the Caribbean and Pacific islands as countries are forced by the WTO to accept imports of bananas grown by American companies such as Del Monte.

WHY DO the unions not even threaten to use the powers they have in the fight against privatisation? They fund the Labour Party, and if the Labour government persists in its anti-socialist, pro-capitalist course, why continue to give it financial support?

To withdraw funds would not cut off the working class from the labour movement, but only from the Labour Party-the party now of big business. If the Blair government can do without trade union funds and prefers to be funded by big business, then one is left in no doubt on which side the party stands.

You can’t tell the difference

DESPITE NEW Labour’s election landslide, the loss of their North West Norfolk parliamentary seat offers a more balanced assessment of what public attitudes towards New Labour really are. The Labour candidate, Dr George Turner,was a moderate, unobtrusive Labour MP who had stated before he was elected in I997 that he was New Labour before the term was invented.

The Tory’s victory illustrates the underlying fragility of everything New Labour is supposed to stand for. As someone who had unwaveringly hailed every aspect of New Labour modernisation since it began, Dr Turner became one of its first victims. He was New Labour, whereas many of the voters that deserted him were Labour!

Potential Labour voters just couldn’t politically distinguish between him and the Tory, and probably either abstained completely or dumped their vote with the Liberal Democrats.

THE Campaign Against Depleted Uranium (CADU) has recently been proactive in reaching out to workers linked to the military. Last month a demonstration organised by DAAMDU (Direct Action Against Militarism and DU) was held at the Ministry of Defence procurement centre at Filton, Bristol. This is a beautiful new 50 million building.

The protesters leafleted the workforce as they arrived for work, and four protesters swam across the moat and managed to secure a banner to one of the supports of the overpass which workers use to enter the building. The banner proclaimed, “MOD-purchaser of nuclear death”. While recognising that workers need employment, it is only right that these workers are made to feel very uncomfortable about the particular work they are doing.

In Manchester CADU has demonstrated outside the military recruitment office. Actions could take place elsewhere. Contact [email protected] gn.apc.org to get materials.

I WAS disgusted to hear that the French government and its European partners tried to stop a British protesters’ train going to Genoa. This comes from governments which insist they believe on free movement (for business) within the EU. It comes from governments who say they want to listen to the “legitimate” concerns of demonstrators and who believe in “transparent” international meetings.

It’s not very “transparent” if normal travel freedoms are ripped up! It should come as no surprise that New Labour is clamping down on the liberties of protesters. I am sure it would make all forms of resistance illegal if it thought it could get away with it. The narrow core of Blairites regard anyone who doesn’t follow the “true way” as disloyal and dangerous. It’s a bit like Stalin’s ideology.

When New Labour banned “football hooligans” from travel, with no evidence against them, it was a big step backwards for all of us. We should zealously defend every liberty we have to protest and to travel. If you don’t defend the football supporter, the refugee, the immigrant, the peaceful anti-capitalist protester, then who will be next?

I STUDY at Dunraven School in Streatham. Dunraven is regarded as the most outstanding secondary mixed school in south London by the Evening Standard and Ofsted.

We held a mock election last month and almost all 1,000 pupils voted. The Labour Party won most of the votes. The interesting thing was that the Socialist Alliance got their best result-7.4 percent!

I AM very grateful to Socialist Worker for giving me help and support, and highlighting my case. As you may be aware, in August last year my case was referred back to the Court of Appeal.

I am very frustrated that in the run-up to proceedings the Crown Prosecution Service is refusing to make disclosure of all the documents relating to my case, despite previous agreement to full disclosure. I would be grateful if readers could write to Ms Garrett, CPS, Reading, Berkshire about this.

I WRITE in solidarity with those who are suffering as a result of US and British sanctions on Iraq. The problem is being made worse by the almost daily bombing of Iraq which has included residential areas, hospitals and schools. I am sickened by this policy, whose victims are the ordinary men, women and children of Iraq.

WHILE I belong to a different tendency of the international left, I think your paper is excellent. It is the best way I have of getting the “real story” of what is happening in Britain. I try to read it every week.

I also think it is great that the SWP is getting more involved in coalitions with other left organisations in Britain. 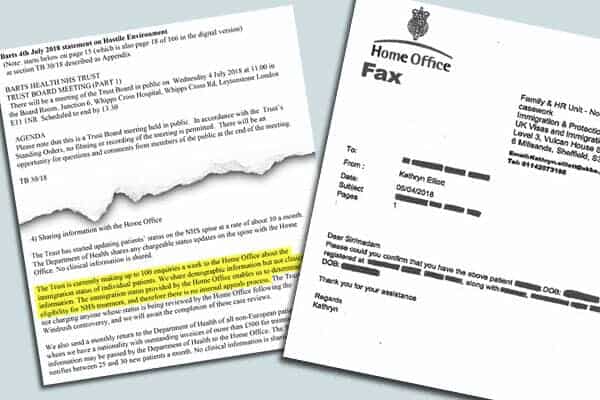 Victory at Connex — 'Bosses scared to show their faces'