Striking workers in Bridgwater, Somerset, have stopped an attack on their terms and conditions at fruit juice manufacturer Refresco Gerber.

Unite union branch secretary David Jeffs told Socialist Worker, “This is a massive victory for Unite and the Refresco Gerber juice workers. It feels great to win when so many said we couldn’t.”

After a raft of attacks on their conditions, workers in the Unite union took a series of 36-hour strikes.

They were out to defend their sick pay entitlement, their pay protection for workers moved onto different shifts and their six-day shift pattern.

They called off planned further strikes after bosses blinked first this week, with a new offer responding to all three demands.

Strikers spoke to Socialist Worker on the picket line last week. Steve said, “At first they were just saying ‘Go on and have your strike then’.

“Now they’re having to talk because it’s affecting them. We’ve got a huge warehouse, and it’s as empty as I’ve ever seen it.”

The last strike at the company was more than 50 years ago, but workers’ morale was repeatedly boosted by solidarity from other workers.

Local people, including complete strangers, have come to the picket line with cakes, beers and bags full of shopping.

“It’s really heartwarming,” said Steve. “You can be out here and feel rotten, so it’s absolutely fantastic to get that support because then you know you’re not alone.”

Steve thought the workers’ fight had struck a chord because so many others are facing similar attacks.

He said, “Everyone’s being squeezed, when you look at conditions or at pay.”

Gary said, “We’ll never know how much they could have taken off us down the line if we hadn’t shown we could galvanise the workforce and stand up for ourselves.

“The bosses’ attitude is that we should be grateful just to have the job, that we can’t stick up for our rights. But that’s not how it is at all.”

Some workers’ names have been changed.
Topics Unite 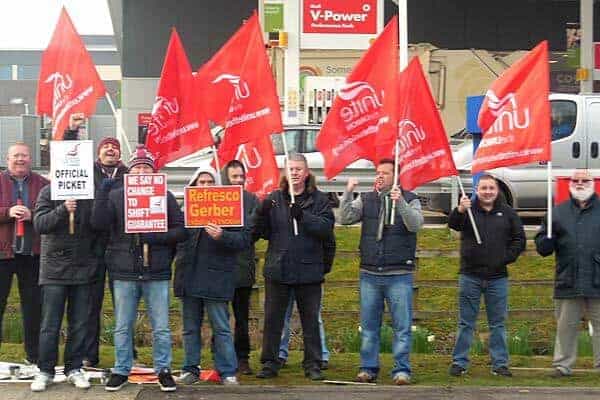