‘In search of work’

MOST refugees who enter Britain illegally have not come to live off benefits, according to a government-funded project. The study shows most refugees come to Britain intending to find work. “Not a single illegal immigrant we examined thought benefits was a reason for coming to Britain. A key reason people gave for coming here was that they expected to be able to work,” said Professor Bill Jordan of Exeter University, who was part of the study into 150 immigrants.

This evidence blows away the lie put out by the press and politicians that illegal immigrants are lured to Britain by “generous” benefits. Tory shadow home secretary Ann Widdecombe repeatedly refers to Britain as a “soft touch”, and a recent News of the World editorial described refugees as “dole scroungers, benefit cheats and all-comers.”

New Labour’s crackdown on refugees has forced many of them to enter illegally. They face living off vouchers worth just 70 percent of Income Support benefits, and being dispersed to towns across Britain. But the government-funded study shows many refugees are determined to find work. Many of the immigrants interviewed were doing low paid, manual jobs. This is despite half of them being graduates or having diplomas.

Three illegal immigrants were found clinging to the side of a Sea France ferry on Thursday of last week in a desperate attempt to get into Britain. They will get no sympathy from home secretary Jack Straw for their life-threatening journey. He will deny them the right to work and try to deport them as quickly as possible.

They want to publish it in local and national newspapers. For a copy see their website: www.defend-asylum.org 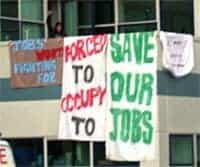