Labour councils and housing associations have criticised the bedroom tax.

But campaigners are asking them to refuse to do the Tories’ dirty work by evicting people who fall behind on their rent.

Shaun O’Regan is the secretary of the Rodney Road tenants’ and residents association in Southwark, south London.

“It was an angry meeting, and there’s lots of fear—people don’t know what’s going to happen,” he said. “I argued that councillors shouldn’t implement these cuts, they should promise no evictions.”

In Spain some workers have refused to cooperate with evictions.

Housing workers in Britain could do the same.

“There are something like 4,000 tenants in Southwark who’ll have to pay more thanks to these benefit cuts,” said one housing worker.

“We’ve passed a motion calling on the council not to evict people who go into arrears thanks to the benefit cuts. We want our union to look into ways we can refuse to cooperate.” 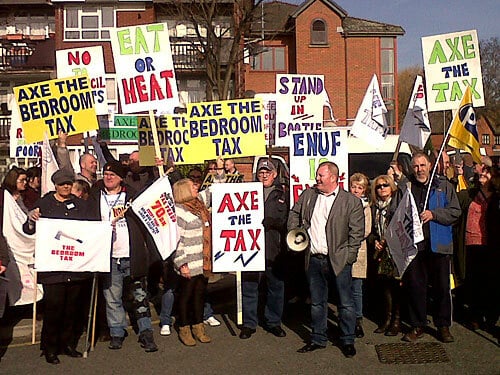 'The Tories' bedroom tax will make us homeless'