Reid Kerr lecturers strike over pay and conditions in Scotland

Over 200 lecturers in the EIS FELA union at Reid Kerr College, Paisley, started a series of rolling strikes today, Wednesday.

They are fighting attacks on their wages and conditions. Around 40 pickets covered the four college gates on a freezing cold day.

Reid Kerr, like all FE colleges in Scotland, faces massive attacks. The Scottish government wants to impose another £30 million worth of cuts this year by amalgamating colleges.

John Kelly, The EIS FELA branch secretary at Reid Kerr said, “We’ve had enough. We have been in dispute with the management since August over pay but they have refused to budge and offered us zero percent again.”

John said that after workers said they would begin their programme of strikes, management asked to meet them.

“This shows that industrial action is the way, for now at least, to open the door,” he said. “We don’t expect them to give us want we want but at least it’s a start. Our strike ballot was overwhelming with 87 percent backing the union on a 70 percent turnout.”

Reid Kerr is set to be merged with James Watt and Clydebank colleges. Workers at both these colleges supported today’s strike at Reid Kerr.

Ian Cochrane, branch secretary of James Watt college, was on the picket this morning.

“We came down here today to show solidarity with our colleagues,” he told Socialist Worker. “Both us and Clydebank have offers on the table. But Reid Kerr is under attack because they have the best terms and conditions of the three colleges, and that’s what’s under attack.

Strikers plan a further to strike for two days for each of the next two weeks. They plan a three-day strike each week until June if there is no movement from the management. 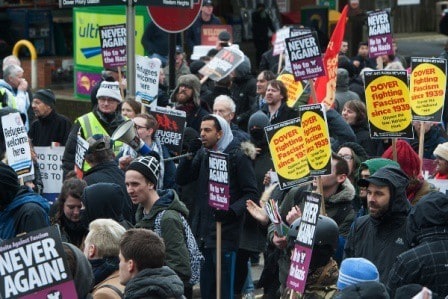 Anti-fascists stand up to Nazi National Front in Dover

Union leaders are dithering, but build a big vote for action