Remembering the dead, fighting the US occupation

This article is over 17 years, 2 months old
THE anti-war movement was already taking to the streets before the all-out assault on Fallujah.
Downloading PDF. Please wait...
Saturday 13 November 2004

THE anti-war movement was already taking to the streets before the all-out assault on Fallujah.

Over 2,000 people attended the naming of the dead ceremony in London organised by the Stop the War Coalition on Tuesday of last week.

The following evening over 400 people attended a Stop the War Coalition meeting in London to discuss the outcome of the US election.

Along with other speakers, George Galloway called for a renewed effort to broaden the anti-war movement and deepen its understanding of why we need to resist imperialism.

Also last week over 150 people attended a showing of Fahrenheit 9/11 at University College London (UCL). A further 100 people could not get in.

ANTI-WAR activists are celebrating the news that local MP and defence minister Ivor Caplin has decided to stand down at the next election.

Caplin has been targeted by regular anti-war protests and pickets over the past two years.

Just two days before his announcement, 50 protesters picketed his surgery in Hove over the imminent assault on Fallujah.

Caplin and the local Labour Party have gone overboard in claiming the decision is nothing to do with the war in Iraq.

Yet even the local paper placed a picture of an anti-war protest next to the story of the announcement.
Andy Player

ABOUT 200 people rallied at Piccadilly Gardens last Saturday to protest against the imminent attack on Fallujah.

Tony Dale addressed the crowd on behalf of “all the members of the Labour Party in Manchester who opposed the war before it began and still oppose it now”.

Richard Searle of the Stop the War Coalition spoke about the reasons for the attack on Fallujah, and Clive Searle of Respect urged everyone to keep up resistance in this country to the occupation.

The night before there were six roadside protests across Manchester, which gained a lot of support from motorists.
Sam O’Brien

ABOUT 150 people defied pouring rain to hold a vigil on Saturday in the wake of the deaths of three soldiers from the Black Watch regiment.

Rose Gentle—mother of Gordon, who was killed earlier this year in Iraq—said, “It’s time to go to Downing Street and tell Tony Blair to get out. It’s time to bring the boys back know.”

Dante Zappala, representing the US campaign Military Families Speak Out, said, “The only way to stop the war is to act collectively.

“My hope is that the people of Scotland and Britain can bring the troops home if they speak with a collective voice.”

There were protests and stalls elsewhere in Scotland, with queues forming to sign petitions in Fife, where most soldiers in the Black Watch are from.
Alan Thomson

SIXTY PEOPLE attended a Stop the War Coalition showing of the film About Baghdad in Sheffield last week.

People interviewed in the documentary, made by an Iraqi exile, described the humiliation they felt at the hands of the US, but also their determination to resist.

We used the evening to launch a statement that is to be issued in the local press calling for an end to the occupation of Iraq.
Alan Kenny

THE NAMING the dead ceremony organised by the Stop the War Coalition last Tuesday was a very powerful and dramatic event.

Held on the steps of the Guildhall, it was attended by about 150 people.

The reading of the names was begun by the city mayor, followed by local writer Graham Hurley, several councillors and a wide variety of Portsmouth people.

They included representatives of the Muslim community and ex-servicemen from UK Veterans for Peace who laid a wreath with white poppies at the war memorial.

A special guest reader was Mark Serwotka, general secretary of the PCS union, who was in town to address a pre-strike rally of his members.

A highpoint of the evening was the contribution from a delegation of school students who came to protest at the detention and proposed deportation of 14 year old Lorin Sulaiman, a Kurdish girl at their school.
John Molyneux 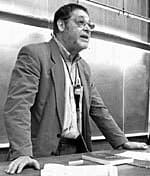