This article is over 14 years, 4 months old
Disabled workers battling to save Remploy factories are set to join the Unite union demonstration outside the Labour Party conference on Sunday.
By Simon Basketter
Downloading PDF. Please wait...
Tuesday 18 September 2007

Disabled workers battling to save Remploy factories are set to join the Unite union demonstration outside the Labour Party conference on Sunday.

Union activists have been touring the country from the north of Scotland to the Labour conference in Bournemouth in protest at government plans to shut 43 Remploy factories, axing 2,200 jobs.

The protest has been designed to echo the 1936 Jarrow unemployed march – indeed the Jarrow plant on Tyneside is on management’s hit list.

Dave Reed is a blind man from the Remploy factory in Aintree, Merseyside, where he makes mattresses for Ikea.

Assurances that he will be guaranteed another job, perhaps in a supermarket, with his wages protected, give him little comfort. Dave says he hasn’t got the confidence to start somewhere else after 20 years and he would miss what he called the “family atmosphere” and working with other disabled people.

Alec Mills, who has impaired eyesight and produces shower gel and washing-up liquid for Tesco and Marks & Spencer at Remploy’s St Helens plant, is worried too about the devastating impact of redundancy.

“When you say ‘hello’ to someone in the morning you can be the first person they’ve talked to since they clocked off the night before,” said Alec.

“Shutting factories is about more than money. This is about destroying the lives of a lot of vulnerable people.”

The GMB union argues that 5p of every £100 in contracts awarded by the government would keep all 83 Remploy factories and 5,000 workers operating at full speed.

Bosses appointed by the government claim a £20,000 subsidy per head is needed, a figure the GMB disputes.

Last week, secretary of state for work and pensions Peter Hain was confronted on the podium at the TUC conference in Brighton by GMB national officer Phil Davies, who tipped a sack of Remploy redundancy notices on the floor.

A severely embarassed Hain claimed they were issued without his authority. “I want justice for all Remploy workers,” he said.

Phil Davies called Remploy directors “despicable” and said the plans were a “disgrace”.

GMB regional organiser Val Scott said workers were furious with the company for issuing the notices in an attempt to influence their decision over strike action.

She added that Remploy was trying to pre-empt something that had not been agreed, as there had been no redundancy packages agreed between the company and the union.

Remploy workers are determined to save the factories and the rolling protests are ongoing.

The TUC in Brighton voted unanimously to back a strike ballot at Remploy.

One GMB source told Socialist Worker, “This will end up in factory occupations.

“We are in a collision course with the government because they don’t understand that the factories have to stay open.” 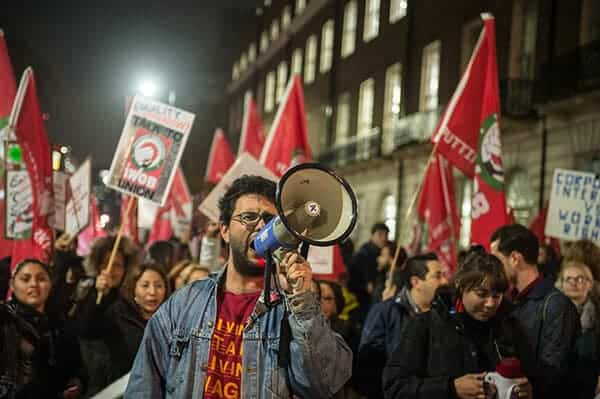