This article is over 9 years, 6 months old
The Tories plan to throw disabled workers on the dole. But strikes, occupations and solidarity can stop them, writes Simon Basketter
Downloading PDF. Please wait...
Tuesday 17 July 2012

Disabilities minister Maria Miller announced last week that 27 plants would close within weeks. This would throw 1,421 workers on the dole.

Workers in all 54 factories were set to walk out this Thursday and next. Bolton Remploy worker Bill told Socialist Worker, “We are gutted about this.

“We all got together after the closure announcement to discuss what had happened. Everyone was shocked. How could Remploy do this when redundancy packages have not even been agreed?”

The Tories had planned to offer the factories in a garage sale to private companies. Instead they moved the closure programmes forward. Nine factories will still be sold off.

Alex Flynn, head of campaigns for the Unite union, said, “The decision was like a bolt from the blue.

“The whole consultation now seems to have been a sham with the real decisions taken months ago. The government needs to come clean about how this callous decision was made.”

Roy, a Unite rep added, “We were led to believe that they would not look at our situation until at least 2013. Again we have this hanging over us. We’ve had it hanging over us for the last four years.”

The government has said that keeping Remploy workers employed isn’t worth the cost. But the Tories have grossly inflated these “costs” to justify the cuts.

So, Miller claimed that employing a Remploy worker costs £25,000—compared to the £3,000 cost of giving a disabled person an Access to Work grant.

But while Remploy employed 5,217 workers last year, its annual report notes it also “found 20,079 jobs in mainstream employment for disabled people”. That means that each Remploy job cost less than £4,000 using the government’s own measure.

Mandy, a GMB union rep at the Abertillery factory in Wales, said people were upset, angry and numb at the news. Like many others, she doesn’t think that sacked Remploy workers will find new jobs.

She also pointed out that some are unable to travel. “How can they be so cruel to disabled people?” she asked. “We don’t know anything other than we have lost our jobs.”

Ken, a GMB branch secretary, has worked at the Spennymoor Remploy factory in Durham since 1978. He said, “It is hard enough for anyone to get a job at the moment. It will be even harder for someone with a disability. That’s why we have to strike.”

The GMB convenor Phil Brannan said, “I can’t rule out more unofficial action. Members are extremely angry. We have tried to be reasonable but the company has not reciprocated.”

Time is running out to save the factories. The Remploy workers are carrying out a sustained campaign to save jobs. They need the backing of the entire Labour movement. Factory occupations and a massive show of solidarity can keep the factories open. 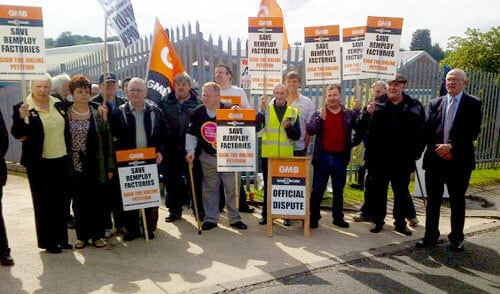