Over 7,000 British Gas workers were set to walk out over bosses’ “fire and rehire” plans on Thursday of this week.

The GMB union ­members’ action is scheduled to ­continue until midnight on Monday of next week.

Some 4,000 service and repair gas engineers will down tools during the five days.

The GMB says the only exceptions will be dealing with emergencies and problems for households with vulnerable people.

The move comes after an 89 percent vote in favour of strikes.

Centrica, British Gas’s parent company, wants to cut pay, terms and conditions. Management issued an ­ultimatum for workers to agree to cuts by 23 December last year on pain of dismissal.

“GMB engineers in British Gas have overwhelmingly rejected Centrica’s proposals to cut pay and terms and ­conditions,” he said.

“These amount to little more than a zero-hours ­contract attached to a bonus scheme.

“These unacceptable ­proposals from British Gas would do extensive damage to the work-life balance of thousands of gas and electrical engineers across the country.”

Bowden added that O’Shea “Stands to scoop a £300,000 windfall from his gamble that his shareholding in British Gas will increase if he succeeds in cutting the pay per job for British Gas engineers.

“Mr O’Shea is paid a salary package worth nearly a million quid a year.”

The Unite union has suspended an eight-day walkout at the DHL Supply Chain company in Liverpool.

Around 120 striking Unite members had walked out on 19 December and affected production at the distribution centre.

DHL distributes Burton biscuits to major stores throughout the region. Despite a police presence, a combination of picketing and a car cavalcade by strikers ensured the Wagon Wheels and Jammie Dodgers supplies were severely disrupted.

The union called off the action after three days to hold talks after bosses made an improved offer.

The workers are demanding an end to a bullying management culture and low pay.

Thanks to John Carr and Mark O’Brien

More than 840 Unite union members, predominantly based at London Heathrow Airport, are fighting against a fire and rehire policy.

Thrown under a bus when action was called off?

Some workers at the Optare bus manufacturer near Leeds feel “let down by the union” after their pay fight came to an end in December.

Unite union members at the company held a series of walkouts to demand a pay rise in November and December of last year.

On 14 December the union said workers voted by 73 percent to continue the strikes, promising action into January.

Around a week later the union suspended industrial action following a vote to return to work—which one worker said was “close” on a low turnout.

Kevin, a Unite union member, said momentum had “fizzled out” and strikers came under more financial pressure in the run-up to Christmas.

He thinks the union could have done more to sustain the action.

“A few of us feel a little bit let down by the union, myself included,” he told Socialist Worker. “Our regional officer, Mr Bedford, was on the picket line with us and that’s commendable.

“But maybe the union could have been a bit more forceful in the way they were dealing with reps from the company, not just being seen to be brushed off by management.

“That’s where we think a bit more pressure could have been applied from the top end of the union.”

The Optare workers received money and solidarity from across the labour movement, showing the potential to keep up the momentum.

Kevin said, “The financial support we had from various branches and individuals was heartwarming.

“In some circumstances, it was more important than the backing that the union gave.”

Security guards at the Royal Berkshire Hospital in Reading are continuing their “David and Goliath” struggle into the New Year.

Around 23 Unite union members struck over pay on Monday, the first of three four‑day strikes in the New Year.

“But standing in the way of this reasonable demand for a living wage is a management which is part of a global organisation with a £100 million turnover.

“Our lowly-paid members provide security 24/7 at the

Royal Berkshire Hospital which is on the Covid-19 frontline.

“However, the company continues to refuse to engage in meaningful talks over the 2020 pay award and other issues, such as harmonisation of sick pay, and enhanced pay for working nights, weekends and overtime.

Parmar added, “We would like to thank the people of Reading for the great support that they have given to our members.

“It has been a real Christmas tonic that is deeply appreciated.”

Porters at Heartlands Hospital in Birmingham are set to strike for two days from Monday of next week.

The Unison union members’ action is the latest in a long-running battle over shift changes.

Workers struck on 30 and 31 December, but didn’t hold any pickets. But strikers planned to picket the main entrance of the hospital on the forthcoming strike days.

Rolls Royce battle motors on into the new year

Rolls Royce workers in Barnoldswick in Lancashire are continuing their fight for jobs into the New Year.

Unite union members at the aero engineering plant staged their 35th day of strikes on Monday.

They are fighting against bosses’ plans to slash 350 jobs and offshore production of the Trent Engine blades.

Workers fear it could lead to further job losses or the closure of the whole site.

lMessages of support to [email protected] 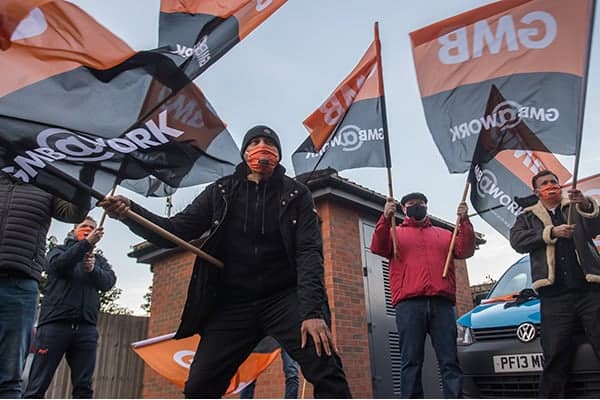