Reports round-up: protest against the deportation of Ken Macharia

Protesters gathered at the Home Office in London last week against the deportation of Ken Macharia.

He is due to be deported to Kenya, despite the high risk of homophobic persecution that he would face there.

The British authorities acknowledge same sex sexual activities are criminalised in Kenya with a sentence of up to 21 years in jail.

He has been given longer to stay in Britain but still expects he will be forced to leave.

Around 200 cleaners, domestics and other support staff at Princess Alexandra Hospital in Harlow, Essex, are celebrating after bosses backed off from plans to outsource their jobs.

The Unison union members had planned to walk out on Thursday of last week—and a further five times this month.

Bosses conceded to their demands before their first action.

It’s another example of the power of strikes.

The 21 Unite union members are employed by outsourcing giant Mitie.

Unite lead officer for health in the south east Scott Kemp said, “We regard this as an important victory. It demonstrates the strong solidarity shown by our members and the support they received from the local community.”

The package includes a 14.5 percent pay increase for security officers, taking their hourly rate to £9.50 an hour.

Workers at Glasgow and Aberdeen airports staged the second 12-hour walkout over pensions on Monday.

It follows a 12-hour strike by members of the Unite union on Friday of last week.

Some 10,000 Tube workers could be headed for strikes after their RMT union announced a formal ballot for action.

London Underground workers are fighting for improvements to their pay and conditions, but bosses are refusing to grant them.

Security guards at Luton Airport have begun a 49-day strike.

Workers began the action on Wednesday of last week and are set to continue until 23 July unless negotiations this week are fruitful. New shift patterns are set to affect around 120 security guards. They would be liable to work an extra 15 days a year and only getting nine full weekends free annually.

Woolwich Ferry workers were set to walk out on Friday this week and Monday next week in a dispute over pay, health and safety and staffing levels.

The Unite union members have already struck for eight days.

Drivers and passenger escorts for school students in Hackney, east London, are preparing for a fresh series of strikes.

Workers are set to walk out for six days in June and July after voting unanimously for new strikes.

The 38 members of the Unite union want £50 a week extra for working split shifts backdated to July last year, when they raised the issue.

Over 30 days of strikes at Sellafield

The Unite union members are employed by outsourcer Mitie and are fighting for a pay rise from their current rate of just £8.45 an hour.

Workers have held 26 days of strikes since April.

Council workers in Tower Hamlets, east London, have voted by a huge margin for strikes in a consultative ballot.

Some 5,000 Unison and GMB union members overwhelmingly backed action over a raft of attacks on their pay and conditions.

Unions are moving towards a full strike ballot and walkouts could hit the Labour-run council in the coming months.

Cleaners who work at the Trocadero entertainment venue and the Criterion building in Piccadilly Circus are set to strike.

They are fighting for the London Living Wage of £10.55 an hour.

Outsourced to Doc cleaning, they are currently paid just £8.31 an hour.

They are members of the United Voices of the World union.

Barristers argue for strike on 1 July

Criminal barristers in England and Wales have voted overwhelmingly for a national walkout on 1 July in protest at low fees.

Barristers in the Criminal Bar Association voted around 94 percent for strikes.

Some barristers are paid as little as £46.50 for a day in court, the association says.

United Voices of the World union members working as security guards at St George’s university have voted in an indicative ballot to strike.

St George’s is a medical school in Tooting, south London, and part of the University of London.

Workers want bosses to terminate its contract with contractor Noonan and bring them in-house.

A petition against the cuts has almost 5,000 signatures. 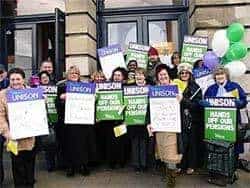 Out to halt the pensions attack