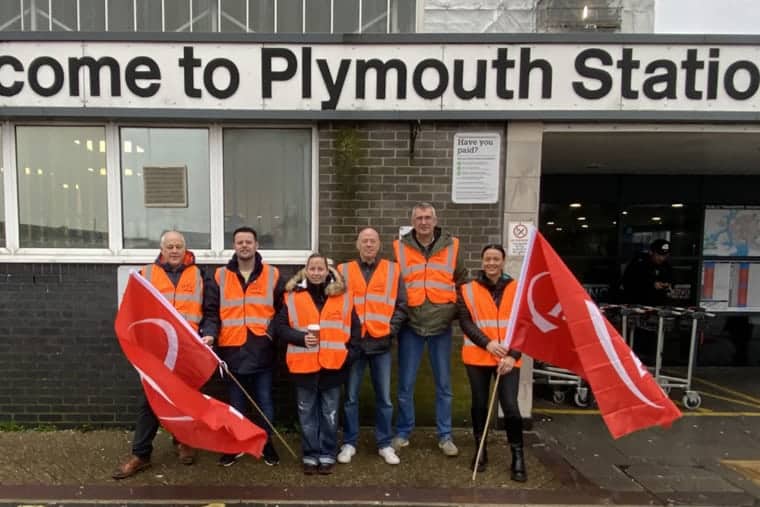 Workers on Cross Country trains struck on Christmas Eve and New Year’s Eve to defend the role of the guard.

Train managers and senior conductors in the RMT union voted overwhelmingly for action as the company has sought to draft in other staff to carry out their roles.

Workers are in a fight to stop the company from undermining the role of these critical grades.

Picket lines at Edinburgh Waverley stations were joined by the Gate Gourmet staff who are striking again in a long running dispute over bullying and harassment in the workplace.

Woolwich Ferry workers accuse Transport for London (TfL) bosses of “declaring war” by suspending seven workers with no reason given.

It comes after several strikes by ferry workers spanning almost a whole year. The workers are set to walk out again in a strike planned to last until the end of March.

Workers will soon return to picket lines in a strike that will last until the end of March.

Unite union general secretary Sharon Graham said, “The suspension of our seven members, including two of our reps, needs to be rescinded immediately. We won’t allow TfL management to get away with ‘declaring war’ on Unite and its members.

Alongside the suspensions, workers are also fighting the failure to produce a new pay award, for an end of excessive use of agency staff and the failure to provide adequate health and safety training to new employees.

Unite has also demanded an urgent investigation into claimed “technical issues” that has forced the ferry’s operation to stop.

Workers delayed a strike that was to start last Monday due to the suspension of the ferry.

DHL workers at Bellshill won a pay rise in December after strikes were called off.

Drivers and shunters received a pay rise of between 10 and 19 percent.

More could have been won at Tesco…

Tesco workers who were set to strike over the Christmas period accepted by 90 percent an improved pay offer. The Usdaw members received a 5.5 backdated pay rise to July and a further 0.5 percent from the end of February.

Strikes over such a crucial time for bosses could have won workers a larger pay rise above the RPI rate of inflation.

…But action could be on at Asda

Thousands of workers at supermarket Asda are preparing to take action after the company offered them another insulting pay offer.

The members of the GMB union who work as clerical workers, LGV drivers and in the warehouse voted for strikes in an indicative ballot last year.

The GMB said it will now discuss whether to move forward to a formal ballot.

Forge workers steel themselves for fight

Workers at Somers Forge in the Black Country are set to strike throughout January after rejecting a 4 percent pay deal.

The members of the GMB union began the dispute after the company honoured only one year of a two year pay deal.

Workers struck for three days in December. The members of the UVW union are outsourced to Carlisle Support Services, and are demanding sick pay and maternity leave in line with all NHS staff.

Morrisons Data Services sacked a black trade union rep after a customer complained that he “did not look like a meter reader”.

The GMB union has warned the firm that it could face action if he is not reinstated.

Rob Daley was working in West Yorkshire when a member of the public insisted he didn’t look like a meter reader.