This article is over 9 years, 6 months old
Connaught School strikes against conversion Teachers at Connaught School for Girls in Leytonstone, east London, began a two-day strike on Tuesday of this week. The walkout is part of an ongoing campaign to stop the school being converted into an academy.
Downloading PDF. Please wait...
Tuesday 27 November 2012

Teachers at Connaught School for Girls in Leytonstone, east London, began a two-day strike on Tuesday of this week. The walkout is part of an ongoing campaign to stop the school being converted into an academy.

Up to 30 people joined the picket line on Tuesday morning. Strikers were joined by supporters from other schools and other unions, including the PCS and Unite.

Those on the picket line reported a “fantastic” mood. Some children came out of school when they heard that strikers were handing out letters explaining their dispute. The letters were well-received by students and parents.

The teachers, in the NUT union, plan to strike for two days every week. They have already held three successful strikes. The NASUWT union is also balloting for action at the school.

Governors at the school voted narrowly to back the academy conversion in October. But teachers are demanding a fresh vote. Only eight out of 20 governors backed the conversion. The rest either voted against, abstained or were absent.

• Send messages of support or invite a striker to your next meeting. Email [email protected]

A fantastic campaign in a small area of West Yorkshire has pushed an academy school to stop its plans to expand. Shelley College in Kirklees planned to accept year 7 students from 2014.

But governors there dropped the plans after widespread opposition. Many people feared that the move could lead to the closure of two other schools in the area.

Some 200 people came to a public meeting last month, and 800 marched in the area. Over 1,000 people emailed the local Tory MP to protest at the plans.

Local Labour councillor Cath Harris said that opposition to the plans had been “overwhelming”. Everyone is very pleased.

Campaigners in Ealing, west London, were celebrating last week after a school reversed plans to convert to academy status.

Governors at Petts Hill Primary School revoked an earlier decision to convert following campaigning by unions, parents and others. The school had been due to switch from this month. Schools inspectorate Ofsted said that the school was “good” in every respect last September.

“We were always confident that this was an improving school,” said Stefan Simms, assistant secretary of Ealing NUT. “We now note that Michael Gove has had to respect this change of heart and Petts Hill can remain a good, locally-managed school.” 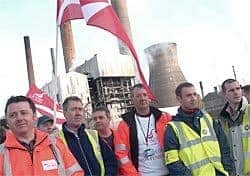 Strike at Penske called off after new offer