This article is over 15 years, 8 months old
Respect is standing five council candidates across Birmingham. Salma Iqbal is standing alongside Salma Yaqoob and Lynne Hubbard in the south of the city.
Downloading PDF. Please wait...
Saturday 29 April 2006

Respect is standing five council candidates across Birmingham. Salma Iqbal is standing alongside Salma Yaqoob and Lynne Hubbard in the south of the city.

She told Socialist Worker, “We’ve been out canvassing in the Sparkbrook and Springfield wards this weekend and people are really receptive to what we have to say. Over 1,000 people have said they will vote Respect and it’s looking really positive.

“The announcement of the closure of Peugeot Ryton at Coventry didn’t seem to have filtered through to the doorsteps yet, I think because it doesn’t directly affect as many people in this part of town.

“But it’s an absolute disgrace that a year on from the closure of the Rover Longbridge plant that Peugeot is closing its factory.

“It will devastate the region, not just affecting people who directly work for the plants, but also their families and people who work in many other connected industries.

“The government should be ashamed that they are not willing to step in to do anything.

“The wards that we’re standing in, Sparkbrook and Springfield, are two of the most deprived in Birmingham. When you talk to people on the doorstep they are angry about the way the Liberal-Conservative council has diverted funds into the better off areas.

“We have real problems in terms of youth unemployment, lack of services and at the same time Labour is campaigning around being ‘tough on crime’.

“It’s appalling that they behave in this way. We have to deal with the reasons that young people are being left behind – not criminalise them.”

Raghib Ahsan and Alliya Stennett are standing as Respect candidates in north Birmingham, where the campaign has also been going well.

Alliya said, “We’ve had a really good time canvassing in the wards – and there’s a lot of interest in what we have to say.

“People are angry with New Labour and they are angry about what the council is doing locally. We have a real chance of winning because we offer something different.”

Jerry Hicks’s campaign in Bristol Lockleaze ward is also stepping up a gear.

He told Socialist Worker, “The last week has gone very well. A number of Respect supporters helped distribute my election address across the ward. We also started our second canvass of the ward.

“Over 400 people have said they will vote Respect on 4 May. It has got to the phase when children in the streets are calling our names out as we go by. That means people are talking about us in the houses.

“We stand a very good chance of making a breakthrough here.”

Respect is calling on all its supporters in the Bristol region to come along to a mass parade and canvass this Sunday 30 April, meeting at 11am, Gainsborough Square in Lockleaze.

Respect is standing five candidates across Preston. These candidates reflect the cultural diversity of Preston and have had an enthusiastic response throughout all the wards.

Our message has been particularly welcome around the Jamea mosque in the town centre ward where Mukhtar Master, Unison shop steward and chair of Preston Stop the War, is standing.

People have been impressed by our commitment to all issues. We campaigned against a recent fiasco that left household refuse uncollected. We were at the forefront of the campaign to twin Preston with Nablus in Palestine.

The ward in which I am standing, St Matthews, is home to some of the most deprived areas in Preston. Blocks of poor quality housing are beset with problems from substance abuse to pensioner poverty.

The response to Respect in these areas has been electric. People say they no longer wish to vote Labour, and increasingly they are seeing Respect as the alternative.

One pensioner we spoke to was thrilled to see the number of young people involved in Respect’s campaign.

Many thanked us for giving them the opportunity to vote for a party that can make a real difference.

The campaign in Preston has become a focus for Respect groups across Lancashire. Groups from Burnley, Pendle, Blackburn and Bolton are helping leaflet and canvass.

Our campaign so far has shown there is a huge audience for Respect and that on 4 May we have a real chance to hold New Labour to account.

In Portsmouth our campaign, which started back in November, has moved up a gear. We are now out canvassing and the support we are receiving on the doorstep is amazing.

We have just finished delivering our fourth leaflet and have been holding weekly stalls for the past four weeks.

One of the issues has been the closure of a local fire station. People in the ward are seeing the closure as an example of the problems with Tony Blair’s policies. There is a need for a party that is willing to fight to improve services, not cut them.

The campaign has been a long one but it is really paying off, with people feeling that we are serious and not just here for the election. A number of people have responded to our leaflets and have joined the campaign.

On the doorstep young parents and older people are agreeing on so much, such as the need for facilities for young people. People are starting to feel that Respect is the party that will fight for them.

Tony Blair decided to visit the council – a flagship for New Labour – on Wednesday of last week. But Respect rustled up an impromptu protest against him. Our candidate Nuruzzaman Hira was pictured with the demonstration on page two of the Camden New Journal.

A senior Labour candidate told the Evening Standard that Blair was a liability: “None of the candidates from the Labour group wanted him to come.” 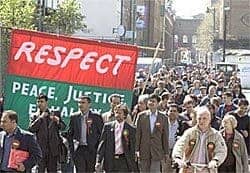 A chance to change Newham for the better