Respect councillor: ‘We are the opposition to New Labour here’

This article is over 16 years, 1 months old
Abdul Karim Sheikh, Respect councillor in Newham, east London, spoke to Socialist Worker after the successes in the local elections on 4 May
Downloading PDF. Please wait...
Saturday 20 May 2006

Abdul Karim Sheikh, Respect councillor in Newham, east London, spoke to Socialist Worker after the successes in the local elections on 4 May

I was born in Pakistan, but I migrated to Britain because I wanted to better myself. Lots of people came in the 1960s, and I was one of those who came and settled.

I’ve done various jobs. I worked in a travel agency – my profession in Pakistan – I had my own business to save a bit of money. Then in 1970 I started working for the Ford motor company, and I worked in the Dagenham car plant for 22 years.

There were strikes in the early 1970s. I was in the T&G trade union the whole time. Although I wasn’t elected to a position, I helped to coordinate things, bring people to meetings and translate things. It was a very mixed workforce.

From the mid-1980s I became actively involved in local politics. By then I had lived in the London borough of Newham for 15 or 16 years.

A number of us decided that minority communities hadn’t played a very active role in the local decision making process. Everything was decided by people who didn’t realise our needs.

I tried to stand as an independent before that, there were about 14 of us – Hindus, Sikhs, Muslims, Christians – working together. That was our first experience, an alliance of communities.

But I didn’t get elected as an independent and decided to join a party. I joined the Labour Party in the late 1980s and eventually became a councillor in May 1990. I had a number of responsibilities on the council.

Back then there was a lot of accommodation and understanding of the needs of immigrant communities. For example, we campaigned for a Muslim cemetery, we complained to the town hall, and eventually we won.

The West Ham cemetery is still being used today.

People who came in those days faced social problems – there was no decent housing. Lots of people were disappointed because they were pushed into areas with bad housing and some faced racist attacks.

Once I was elected I represented the whole community, not one particular section. When you are elected onto the council you cannot discriminate.

There has been some regeneration in Newham in the last 20 years. There has been investment – there’s new housing, improved transport such as the Jubilee Line and the Docklands Light Railway. Lots has been improved since the 1980s.

However, the poverty line is still there. And if you look at areas such as education the Pakistani community still does worse.

There were always divisions and arguments in the Labour group on the council. But during the 18 years of Tory rule people were frustrated and when issues like the Poll Tax came up, people looked for ways to defeat the Tories.

When Tony Blair became prime minister he was a breath of fresh air. People hoped there would be a government sympathetic to Newham.

But disillusionment with Labour is now a fact of life. A neighbour of mine, who happens to be Irish, gave up his membership when the party became New Labour. Lots of people think it was not a change for the best. I was in a difficult situation because I was a member of the ruling party on the council.

The new system of a directly elected mayor, brought in four years ago, has changed the council into a dictatorship. The mayor, Robin Wales, was originally against the mayor plan, but changed his mind after the referendum.

I left the Labour Party and joined Respect last year, partly because I felt councillors were no longer listened to.

The system takes power away from even elected members of the council. That’s why Respect is talking about trying to reverse this system.

There are other issues. A very local school is being moved – it’s a private finance initiative scheme. People at the school and the feeder schools are against this. We are a small party and we’re not well placed to change this. But we can protest, organise petitions, consult the parents on measures like this.

Any opposition would pinpoint where the current government – local or national – is not delivering. Our job now is to represent the electorate and build our support. We are the runners up in most of the wards.

Looking at what we have achieved in Newham and Tower Hamlets I think the next council, if we don’t win it, it might be hung. We also have a clear chance to have an opening in other neighbouring boroughs, such as Barking & Dagenham, Redbridge and Waltham Forest.

Proving we are different

‘We had an induction day on Wednesday of last week. It’s an introduction to how the council works for newly elected councillors.

The next step for us will be to have a discussion about who we elect as leader and deputy leader from our group, and who will take up the 18 seats on council committees that we’re entitled to.

The other thing we’re working on is how to drive forward campaigns over the issues we were elected on – housing, the NHS, Crossrail, youth facilities, all working class issues.

We’ll be campaigning hard on these issues.

We’ve always campaigned on them, but the difference now is that with 12 councillors we’re in a much stronger position than before.

We’re the main opposition in the council. This is an incredible achievement for a party that’s just over two years old.

Now we’re going to have to prove to people that Respect councillors are different – we’re here to serve the interests of the community.

And nothing we do will be possible without the help of the community.

We understand how people in Tower Hamlets have been suffering under New Labour.

People are looking for an alternative – and they recognise we are the ones that can offer something positive.

The people have given us a clear mandate to be a voice on their behalf. Now we have to deliver that.’

Respect has set up a national network of its councillors which will meet at least four times a year. Our 18 councillors can come together at these to share their experiences and coordinate our campaigns nationally wherever possible.

We held our first meeting last Saturday and discussed how we can push key campaigns within the council chamber. We also discussed how to strengthen our links by reaching out to community groups and unions.

There’s always a danger of getting sucked into the bureaucracy of the council and spending all our time doing that.

Nevertheless, there are some key council committees we need to be on.

We need to be making sure that there’s no fraud or funny business going on in these councils.

It was agreed to organise a recruitment drive asking all those who had voted Respect to join and to ensure that vibrant branches exist in every area.

We also agreed to hold a special conference for trade union supporters of Respect in the autumn.

The meeting agreed to prioritise building the Stop the War Coalition demonstration at the Labour Party conference in Manchester on 23 September. 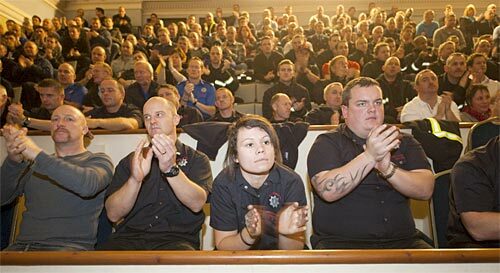 Vote no to these new fire offers