Respect has solutions to housing problems

This article is over 15 years, 8 months old
The crisis is clear, but what is Respect going to do? Glyn Robbins, Respect candidate for Mile End & Globe Town in Tower Hamlets, lays out the party’s programme for action
Downloading PDF. Please wait...
Saturday 29 April 2006

Some politicians say “there’s no alternative” because they can’t think of one. That’s what the establishment parties in Tower Hamlets say about housing.

New Labour, the Lib Dems and the Tories have no answer to the problems – except privatisation and private luxury development. If we take control of the town hall on 4 May, we will stop the handing over of council housing to housing associations.

The New Labour council has siphoned at least £100 million out of council housing. Respect will invest every available penny in a programme of immediate repairs and improvements on our estates.

We will sack all the consultants who have taken at least £6 million out of the pockets of tenants. We will demand that private developers provide a minimum of 50 percent affordable homes on every new development in our borough.

We will use public land and money to build more council housing. We will overhaul the housing management system to provide local, high quality services from permanent, well trained staff.

With 23,000 people on the waiting list, it is demeaning to expect people to “bid” for available homes. We will take responsibility for allocating homes on the basis of need.

We will also get rid of the private medical firm that is currently making money out of peoples’ misery by deciding if they have a medical priority for rehousing. We want a concierge service in every tower block.

Despite the numbers in housing need, there are still around 3,000 empty homes in the borough. A Respect council will tackle this absurdity.

We will support the re-establishment of an independent tenants’ federation. New Labour has hijacked the process of “consultation”.

We believe that tenants themselves are best placed to make decisions about the future of council housing.

We will take seriously the environmental issues relating to housing such as energy efficiency and the preservation of green spaces.

Thousands of council leaseholders are being ripped off by the council and being driven to the edge of bankruptcy by huge bills. We will give leaseholders a fair deal.

We have the worst overcrowding in Britain. A Respect council will adopt a strategy to reduce overcrowding through “knock-throughs”, adding extra floors and using the “dead space” that exists on many estates.

This is just the start, but we know it won’t be enough. To get the homes local people need, a Respect council will have to form alliances beyond Tower Hamlets.

Around the country, 50 local authorities have said they want to keep their council housing stock. We will join them in demanding that the government meets its pledge to bring all council homes up to a “decent” standard by 2010.

Finally, a Respect council – and our Respect MP – will lead a campaign all the way to parliament, saying that a government that can afford billions on war in Iraq, can afford the money we need for housing in Tower Hamlets.

This election is critical. Unless Respect wins and takes control of the council, Tower Hamlets will simply become a home for sections of City workers.

Squeezed between the City of London and the towers of Canary Wharf, the ordinary working people of the borough are being driven out.

In just four years the population of Millwall has exploded. There have been large increases in other areas along the waterfront, home to City financiers. The Conservatives hope to increase their representation on the council in these wards.

In cahoots with Labour and the Lib Dems, they will continue to allow unbridled property development aimed only at the upper ranges of City workers. Tower Hamlets has already become a tale of rich and poor. Government figures show that Tower Hamlets has some of the highest paid people in London.

But it also has the highest unemployment rate of 12.6 percent. Shockingly the employment rate for non-whites is the lowest in the country at 40 percent.

New Labour has allowed Tower Hamlets to become the most unequal borough in the country. Proposals to merge the housing lists with other London boroughs mean that many on the waiting list in Tower Hamlets could be driven out to other boroughs.

Only Respect can stop all aspects of this social cleansing. Only Respect will start the fight for local people’s rights to remain in Tower Hamlets. 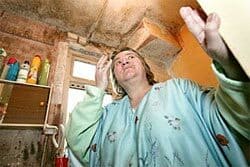 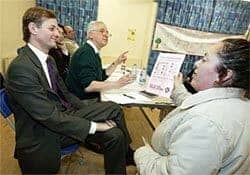 'We have to stand together to improve everyone’s life’