This article is over 15 years, 9 months old
With four weeks to go until the local elections, the Respect campaign in the east London borough of Tower Hamlets is now well under way.
By Jacob Middleton
Downloading PDF. Please wait...
Saturday 08 April 2006

With four weeks to go until the local elections, the Respect campaign in the east London borough of Tower Hamlets is now well under way.

Some 51 candidates are standing across 17 wards, challenging over a decade of New Labour rule.

Already, Labour has been forced to respond to the challenge. After years of supporting Crossrail—a transport scheme that would devastate the Brick Lane area and a local park—council leader Michael Keith last week announced a complete U-turn.

Meanwhile, in a dim echo of the smear tactics used by New Labour against local MP George Galloway, anonymous leaflets attacking Respect have been distributed across a key ward.

However, former Labour councillors are currently caught up in a fraud case, accused of stealing money from local community schemes. And the cash for peerages scandal has further exposed the corruption of Blair’s party.

Underlying this scandal, is an even greater one. While 20,000 local residents remain trapped on council house waiting lists, gated luxury flats are springing up across the borough.

New Labour’s only answer is to attempt to privatise its remaining council homes.

The sense of betrayal among thousands of working class Labour voters is palpable.

Respect activists have been leafleting and canvassing Whitechapel ward, and getting a brilliant response.

Wais Islam, Respect candidate for Whitechapel, said, “We spoke to a former docker, who told us his father had marched with the radical Labour mayor George Lansbury in the 1920s.

“But, he told us, Tony Blair and Gordon Brown have ­disgraced everything Lansbury stood for.

“He said the general election was the first time he hadn’t voted Labour, and that Respect would get his vote again this time.”

In the Shadwell area local shops are plastered with Respect posters, while further east in Bow, Respect members are preparing a second round of leafleting across their wards.

During the pensions strike on Tuesday of last week, Respect candidates and supporters were out visiting picket lines at schools, colleges and council workplaces across the borough.

Regular stalls have also been running at busy weekend marketplaces, festooned with badges, balloons, and leaflets.

They have been disconsolately attempting to distribute propaganda promising little but anti-social behaviour orders and graffiti removal.

Respect’s constituency office is a hive of activity.

Weekly borough-wide meetings have become a focus for tactical discussion and for the organisation of canvassing teams.

With the campaign’s momentum building, candidates and local activists are getting their first sense that another East End is possible.

Victory against attack on green space

A grassroots campaign by local residents and activists has forced Tower Hamlets council and a developer into retreat. The developer East Thames has withdrawn a planning application to massively expand a 42-bed “foyer”—a hostel with training facilities for young people.

The expansion plan would have extended the foyer onto the site of changing rooms on Weaver’s Fields, a popular park in Bethnal Green.

Donald Martin of the Weaver’s Fields Action Group said, “The local community support the work of the existing Draper’s City Foyer, but there was massive opposition to the expansion plans.”

The campaign to stop East Thames’s plans was supported by MP George Galloway and other local Respect activists.

Plans for Tower Hamlets to rebuild the changing rooms elsewhere on the park—reducing the size of the adventure playground—should also now be scrapped.

“We are one of the poorest and most overcrowded boroughs in Britain,” said Donald, “That makes our green spaces even more precious.

“We are going to continue our fight against any development on Weaver’s Field, and to retain the community use of the existing buildings that we were promised.”

For more information on Respect go to www.respectcoalition.org 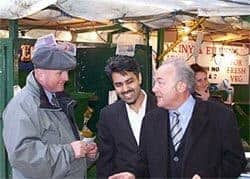