This article is over 15 years, 8 months old
In the borough of Tower Hamlets in east London, one of Labour’s historic heartlands, Respect has won a significant number of seats, making it a major player in that council. Further gains are expected there and in neighbouring Newham.
Downloading PDF. Please wait...
Saturday 06 May 2006

In the borough of Tower Hamlets in east London, one of Labour’s historic heartlands, Respect has won a significant number of seats, making it a major player in that council. Further gains are expected there and in neighbouring Newham.

‘This is a fantastic result. It was hard won. All of the parties united against us in an attempt to stop Respect gaining a foothold. But not only did we beat them, we thrashed them all.

‘This is the first step in making Respect an alternative to all the major parties across Birmingham.’

In other areas Respect was agonisingly close to extending its representation. In Preston, for example, we were just seven votes short of winning, with the Greens paltry 82 probably saving Labour.

Respect was also second in Preston St George’s and Riversway.

In London there were excellent results in Haringey, Ealing and Camden where Respect was second.

In a majority of wards Respect came ahead of at least one of the main parties and has established itself in several key wards in the big cities as the main challenger to the sitting councillor.

In Sheffield Burngreave, Birmingham Springfield and Bristol Lockleaze for example there were very strong votes.

Such results are a considerable achievement for a party that is standing for the first time in these local elections.

Next time electors will know that Respect is a very serious challenger, and are far more likely to vote for it.

On the wider front New Labour took a hammering two years ago in the local elections outside London following the Iraq war – polling just 26 percent. They took another beating this time with a further fall in support. In London voters had their first chance in borough elections to punish New Labour – which they did.

Tony Blair can reshuffle the pack but a crucial parts of Labour’s support has deserted it.

Labour is not going to fall apart over night. It took them decades to build the support and the loyalty that secured them office nationally and locally. But sections of that support has deserted it and dissatisfaction is spreading remorselessly.

The Nazis of the British National Party got massive media attention in the run up to polling. Their ‘breakthrough’ relied on their results in Barking and Dagenham where they received a huge boost from Margaret Hodge’s claim that 8 out of 10 voters were considering voting BNP. 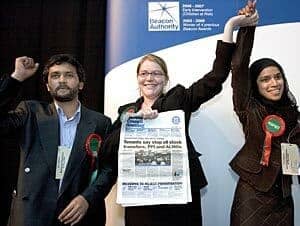