This article is over 14 years, 3 months old
The government last week announced that £16 billion funding had been acquired to fund the Crossrail project for London and the south east of England. City businesses, the government and fare revenues will fund Crossrail.
Downloading PDF. Please wait...
Tuesday 09 October 2007

The government last week announced that £16 billion funding had been acquired to fund the Crossrail project for London and the south east of England. City businesses, the government and fare revenues will fund Crossrail.

Respect has made clear its concerns about the project and the impact it will have on people’s lives. Bethnal Green & Bow, where George Galloway is the Respect MP, will see major work on Crossrail begin in 2010.

George Galloway said, “We still do not have the assurances we need about the threat of displacement and disruption to many residents in east London.

“The government retreated over the Brick Lane drilling, but there is still a threat even there.”

“I also have continuing profound concerns about the impact on the city farm in Stepney Green and to residents in Bow who are threatened with years of traffic disruption, noise and pollution because of Crossrail.

“£16 billion is a huge sum of money, and these massive projects almost invariably come in way over budget

“It is strange the government has found money for Crossrail while investment to alleviate the enormous housing crisis in East London is still hopelessly inadequate.”

Lindsey German, the Respect mayoral candidate in next year’s London elections, said, “The government must guarantee that Crossrail will not compromise improvements to the tube or that money for housing will be diverted to it.

“It is unlikely the budget will not go over the announced £16 billion, but Londoners are already being squeezed for the shortfall.”

While the RMT rail workers’ union welcomed the decision, it also warned that the new line must not become a “premium railway” with fares too high for anyone but business people and argued that it should be publicly run. 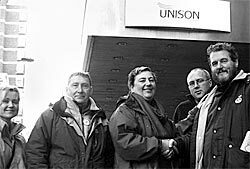 Up to 60 redundancies announced at Chemilines