Bosses at Royal Mail are recruiting a scab workforce of thousands to try and break a coming national strike.

CWU union members have discovered adverts for more than 6,000 temporary Royal Mail jobs at workplaces right around the country.

The jobs are advertised as temporary positions for delivery drivers and warehouse operatives, and are different to the Christmas casuals Royal Mail normally recruits. They’re part of a national recruitment drive—launched without the agreement of the union—following a massive strike vote by Royal Mail workers last week.

Mark Dolan, a CWU rep in north London told Socialist Worker, “This is a scab workforce. This is Royal Mail upping the ante.

“What we see here are jobs advertised across the country. And I know in north London this has not been discussed with us—and certainly not agreed by us.”

The discovery comes as more than 110,000 workers in Royal Mail are preparing for their first national strike in a decade.

CWU members delivered a 97 percent vote in favour of strikes in a ballot that ended last week. They’re gearing up for what CWU general secretary Dave Ward has called “the fight of our lives”—a battle to stop bosses smashing Royal Mail to pieces.

A previous agreement between Royal Mail and the union means they now have to spend two weeks considering the outcome of talks with an external mediator. But as the CWU’s London Division said, the scabbing operation is “proof that Royal Mail didn’t want to reach an agreement.”

They added that the jobs are “not only to try and break any potential strike, but also a clear indication of their intention and long term aim to recruit an alternative, cheaper workforce to deliver parcels.”

There were attempts to recruit strikebreakers in the 2009 post strike. This was met with protests.

Chief executive Rico Back now wants to break up Royal Mail into a parcels delivery company run for profit, and a letters company that will be run down. Packages would instead be delivered later in the day and sorted separately from letters in special automated parcels “hubs”.

Mark said the plan would “crucify jobs if they get away with it”. It would mean taking vital work out of Royal Mail, with new parcels delivery drivers employed on much worse pay and conditions.

He warned that the working hours advertised for scab drivers—later than a usual delivery worker’s shift—were a sign that bosses are already pushing ahead.

“Significantly these are advertised as 11am-7pm shifts. That’s the alternative workforce delivering parcels in the afternoon,” he said.

Mark added that the move shows bosses aren’t going to back down and make an agreement following the strike vote, as they did in a dispute that ended in 2018 without strikes.

Royal Mail workers will have to take hard-hitting action. Yet official strikes are unlikely to take place until the end of November.

In the meantime the CWU is encouraging its members to speak to people on their deliveries and do what they can to build support for their strike. The union has already received tens of thousands of messages of support via its Twitter hashtag #WeRiseAgain.

And CWU activists report being invited to speak at meetings of other unions to talk about their dispute and how they won their strike ballot.

The news of Royal Mail’s scab workforce should encourage even more trade unionists to get behind the CWU. And it could be the focus of a national demonstration that keeps up the momentum of the campaign—with backing and solidarity from the whole trade union movement.

The scab jobs advertised by Royal Mail are not the same as Christmas casual positions usually advertised at this time of year.

These are designated as Christmas jobs, and are for sorting mail in the big offices. They are often recruited through agencies, and with the agreement of union officials.

The scab workforce is different. These aren’t just for sorting office jobs, but packet deliveries in the afternoon. They are not agreed with the union.

And they’re to be employed directly by Royal Mail—which union officials say could be an attempt to get around laws against using agency workers during strikes.

Keep up the momentum

Official strikes are unlikely until the end of November.

The CWU is encouraging its members to speak to people about the reasons for the strike.

On Monday the union launched a CWU Supporters Network. It aims to create a “public army” to support campaigns.

The union has already received tens of thousands of messages of support via social media.

And workers report being invited to speak at meetings of other unions.

The news of the scab workforce should encourage even more trade unionists to get behind the dispute.

It could be the focus of a national demonstration that keeps up momentum. 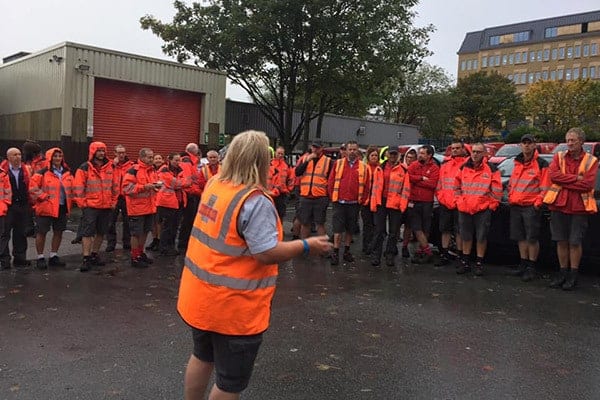 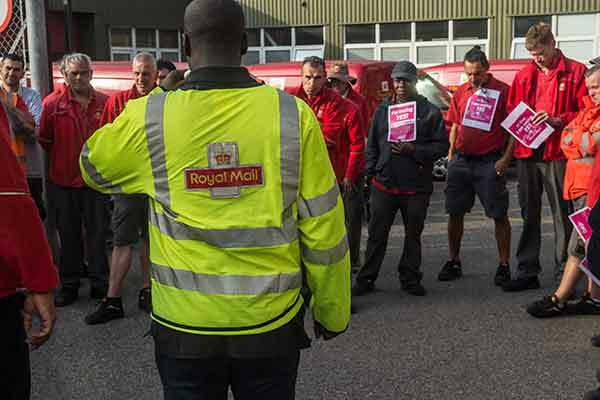