This article is over 12 years, 10 months old
"Sack the bankers – not the teachers!" That was the chant of the hundreds of workers, students and their families as they marched through Tower Hamlets, east London, last Saturday in protest at planned cuts at Tower Hamlets College.
By Sadie Robinson
Downloading PDF. Please wait...
Tuesday 30 June 2009

“Sack the bankers – not the teachers!” That was the chant of the hundreds of workers, students and their families as they marched through Tower Hamlets, east London, last Saturday in protest at planned cuts at Tower Hamlets College.

Up to 1,000 people took part in the march, which reflected the diversity of the local community.

Many of those protesting were studying English for Speakers of Other Languages (Esol) or had relatives who were Esol students.

The planned cuts at Tower Hamlets College would cut Esol provision hard – despite the fact that some 800 people are currently on a waiting list for the classes.

Hazera came to the march to support her mother, who is taking Esol classes at Tower Hamlets. “I’m marching to stop education being destroyed,” she told Socialist Worker. “It’s really disappointing that the government has given money to the banks but is cutting money from education.”

Ali and Miah, two Esol students, stressed the impact of cuts to Esol provision. “If they close our classes then we won’t be able to learn English and it will be harder to get a job,” they said.

Others were taking Esol classes as well as working.

Tina Yussuff has worked for 21 years for the NHS and studies in the evenings. “We are working for this country and paying our taxes – so why can’t we have education?” she asked.

Emilia is a course coordinator and UCU union member at the college. “The whole ethos of the college is under attack,” she said. “Cutting Esol will have a profound effect – not only on individuals but on families and generations to come.”

The campaign at Tower Hamlets is set to continue this week with a one-day strike by UCU members on Friday to save jobs and education.

College workers across the country will be staging protests on the same day, as part of a national day of action against education cuts. 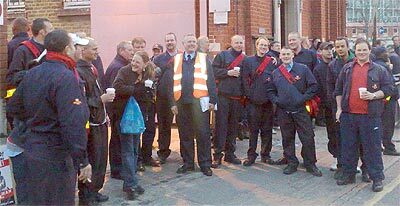