ARGENTINA WAS in turmoil at the start of this week as people revolted against a massive cuts package backed by the world’s bankers and the International Monetary Fund (IMF). Students and teachers struck. They occupied schools and colleges, and blocked roads in cities across the country.

And de la Rua had to announce the withdrawal of the austerity package that has sparked the revolt. Lopez Murphy announced a plan only last week to slash $2 billion from public spending this year.

The move was designed to placate Argentina’s bosses and international bankers. Before Christmas Argentina’s currency slumped as an 18 month long recession continued and panic spread across the world money markets about whether the country would meet its debt repayments. The IMF stepped in with a $40 billion rescue package and demanded harsh austerity measures.

The world’s rich and Argentina’s bosses cheered the cuts package. The British Financial Times insisted on Monday that the Argentinian “government was right”. Workers’ reaction to the cuts package was furious. “University students took to the streets and occupied late on Friday night. The teachers’ union announced a 48-hour strike for Tuesday and Wednesday,” reported one paper.

Another Argentinian paper reported on Monday, “Groups of students and teachers, unemployed and pensioners were maintaining blockades on streets in different areas of Greater Buenos Aires.”

The Argentinian protests are just the latest in a wave of revolt that has swept Latin America in recent months. Revolts have toppled governments in Ecuador and Peru, and beaten back massive privatisation plans in Bolivia. In Colombia up to one million workers were set to stage a national strike on Wednesday of this week against job and welfare cuts. 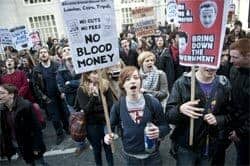