As 150,000 postal workers started a strike ballot this week, prime minister-elect Gordon Brown showed his fear of a revolt over pay.

Sources have told Socialist Worker that Brown rang top bosses at Royal Mail to say, “I’m not coming into 10 Downing Street with a post strike going on – get this sorted.”

He was further shocked when Dave Prentis, general secretary of the Unison union, called for “coordinated industrial action” over the 2 percent public sector pay limit and privatisation.

If they fight together they can break his plan. The PCS union has spearheaded the resistance – now others must join them. The Labour government is weak after Tony Blair was driven out of office two years early, mainly by the revolt against the Iraq war.

Union leaders must not throws away this chance to win.

Two days after Brown’s call to Royal Mail executives, some local post managers began briefing staff that all the punishing strings attached to the 2.5 percent pay offer had been dropped. This was an effort to derail the strike ballot.

But it is not enough to douse the anger among postal workers.

Jane Loftus from the CWU union national executive told Socialist Worker, “The 2.5 percent pay offer remains, and that’s about half the rate of inflation – so it means a big pay cut for people who are already on poor pay.

“The basic pay for the main operational grade in Royal Mail is from £291 to £323 a week. It’s almost impossible to live on that. We need decent pay rises, not pay cuts.

“Royal Mail believes postal workers are 25 percent overpaid and 40 percent underworked. We need a huge yes vote and to work for fighting unity with other workers.

“This week the London CWU and the Post Worker rank and file paper held a meeting for members, with leaders of other unions including Mark Serwotka of the PCS invited. We need meetings like that everywhere.”

Jane Loftus was speaking in a personal capacity 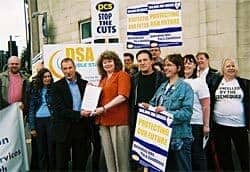