Right to strike on railways

Right to strike on railways

TRAIN GUARDS were due to stage a one-day, effectively national, strike on Monday of next week, as Socialist Worker went to press. But talks between the RMT rail union and representatives of 21 train operating companies were still taking place. “The central issue is safety and the way it’s been compromised by privatisation,” Dave Butler, an RMT union rep on South West Trains, told Socialist Worker.

“We are fighting to restore the central safety role guards used to have. That has been whittled away since privatisation, with guards having to spend more time collecting money. We have enormous public backing. Everyone on the rail knows the issues. Strike action won us gains in our recent dispute with South West Trains. It’s about time we started to spread that feeling nationally. For the first time since privatisation in 1996 it’s starting to feel like the tide is turning in our direction. Tony Blair called our dispute with South West Trains ‘bogus’. Well, it’s his excuses for not renationalising the railway that are bogus.”

The government and those at the top of the rail industry are vulnerable. Alistair Morton, chairman of the Strategic Rail Authority, laid into the RMT last week for calling strikes, claiming he doubted guards’ fears over safety. His insult angered passengers and increased the guards’ determination to strike. The votes for action have been an overwhelming four to one. RMT members on the Great Eastern Railway are reballoting following the large votes for strikes elsewhere.

And Mick Rix, general secretary of the ASLEF drivers’ union, upped the pressure on the government and rail bosses on Monday of this week. On the eve of his union’s conference he announced that ASLEF will be campaigning to reinstate guards on those lines where they have been removed.

“ASLEF will be ready to go into dispute with any company which tries to do away with the role of the guard. The rail industry is still putting profit before passenger safety.” The recent successful strikes on the tube showed the willingness of rail workers to take action over safety and against privatisation.

RMT and ASLEF members respected each other’s picket lines. Activists in the RMT and ASLEF unions on the mainline railway should follow the example set on the London tube.

No stoppages for Jubilee Line drivers 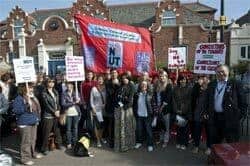