“A particular sort of violent, destructive, nihilistic gangster culture has become the fashion.”

He went on to blame the “intrusion” of “wholly false… Jamaican patois” into England.

“This is why so many of us have this sense of literally a foreign country,” he added.

Starkey made the claim on the BBC’s flagship Newsnight programme, and his comments went largely unchallenged by presenter Emily Maitlis.

Left wing Labour MP Jeremy Corbyn used Twitter to ask the BBC, “Why was racist analysis of Starkey unchallenged? What exactly are you trying to prove”

In the same interview, Starkey claimed that to hear the voice of black Tottenham MP David Lammy “you would think he was white”.

This is an attempt by the right to clothe overt racism with talk of “culture”. It bolsters the confidence of the thugs of the English Defence League (EDL).

Starkey would never make such ridiculous claims about “white culture”.

But it is significant that he feels confident to make such thinly-disguised racist comments on national television. He has been joined by Big Issue owner John Bird, who wrote in the Independent newspaper that, “supremacy on the streets is a black supremacy.”

Rather than looking to the obvious economic and social factors that fed the uprising, many on the right prefer to use racism and the idea of a “culture of criminality”.

They use racism to back up the claim and divert anger away from the government and the police.

As the EDL plans to march in Tower Hamlets, we can’t let the rich and powerful divide us along the false lines of “race”.

The Tory assault on the poor shows that the real divide in our society is class.

We can beat the racists on 3 September 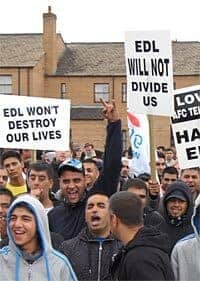