NEW LABOUR seems to be becoming addicted to ballot rigging. Not content with stitching up internal party votes, last week it rigged the ballot to end selective education in Ripon, north Yorkshire.

Most parents in Ripon oppose the 11 – plus. They know it creates misery for children who face an exam at age 11 which will shape their entire future. But the Ripon vote backed selective education by two to one. How come the vote went that way when campaigners for comprehensive education knew they had majority support in the area? The answer, quite simply, is that David Blunkett’s Department for Education and Employment (DfEE) systematically excluded working class parents from voting.

Just 4 percent of parents in the Ripon area send their children to private prep schools. But private schools nonetheless accounted for 25 percent of the vote in the ballot over Ripon Grammar School’s future. Roy Hattersley, former Labour Party deputy leader, wrote last week, “The ballot was rigged to produce that result, and the government’s only intervention in the campaign had-by intention or ignorance-been of immense help to the 11 – plus lobby.”

The DfEE also influenced the outcome of the ballot by suggesting that Ripon College, the secondary modern school in the area, could lose funding if the vote went in favour of abolishing the grammar school. Overwhelming public support for comprehensive education forced New Labour to offer local ballots on the future of grammar schools.

Campaigners for comprehensive education are pushing for ballots in the other areas where 164 grammar schools remain. Now New Labour looks set to repeat the Ripon scandal in those ballots. Education ministers will decide which parents can vote. This is because David Blunkett and Tony Blair want to maintain the brutal 11 – plus. Tony Blair boasts that “not one grammar school has been abolished in the lifetime of this government”. He wants to keep it that way.

This is despite the mountains of evidence which shows that the 11 – plus and selective education damage children’s education. The most recent study, carried out by Professor David Jesson of York University, looked at pupils’ progress in the two years between national tests at 14 and their GCSE exams. He measured the improvement in results during those years-the “value added”. He found that none of the 15 local education authorities with large numbers of pupils in grammar schools was in the top ten for improving exam results. Four were in the bottom ten.

Other studies show that pupils in the top 20 percent of exam results do just as well in comprehensive schools as in grammar schools. The other 80 percent do better in comprehensive areas than in selective ones. And millions of people know from their own experience before the 1970s that the 11 – plus wrecks lives. New Labour is gearing education policy for the few rather than the many. It refuses to lift the charity status of private schools, which means they avoid tax.

And Ripon Grammar School is so full of pupils who have been to private school that it advertises its sixth form as “no tuition fees to pay”. In other words, working class taxpayers are funding schooling which is open mainly to the rich.

Is this a fresh start for kids?

THE RESIGNATION of two of New Labour’s “super – heads” has left David Blunkett’s education policy in tatters. Torsten Friedag, head of the Islington Arts and Media School, resigned last week. He was quickly followed by Caroline McAlpine, “super – head” at Firfield School in Newcastle. Friedag was New Labour’s first “super – head”, paid 70,000 a year and drafted in to “turn round a failing school”.

George Orwell School in north London was closed last year despite a vigorous campaign by staff, parents and pupils to keep it open. The school was reopened as the Islington Arts and Media School under New Labour’s “Fresh Start” initiative. The whole gimmick has been a disaster, despite 8 million being spent on school buildings.

All but half a dozen of the George Orwell teachers were sacked. One of those sacked, NUT rep Kevin Doherty, is still fighting against his victimisation. The sackings created immense disruption as relationships between teachers and pupils were destroyed. The reopened school pioneered Blunkett’s favoured education initiatives. But that resulted in further disruption.

Some disaffected pupils were put on part time timetables rather than integrated into the school. Staff did not know when they were due to be teaching them. There was no staffroom and there were staggered lunch breaks, so teachers had little opportunity to share experiences. The electronic registration system did not work and for a time morning registration was abolished.

New computers arrived but not the programmes needed to run them. The library is still not open and the school resembles a building site. The head wanted to move to a five term year even though it would have increased the pay bill by 50,000. He alienated staff and pupils. That has led to massive disappointment among staff, who were recruited believing they were going to be part of an innovative school.

Sue Caldwell, NUT union rep at the Islington Arts and Media School, says, “Torsten Friedag was a victim of the very politics he so eagerly embraced-the attempt to blame teachers and unions for poor results rather than direct resources to where they are most needed.” The story is similar at Firfield School in Newcastle. Firfield, formerly Blakelaw School, is resorting to offers of 80 a term payments for children who reach exam targets.

Other “Fresh Start” schools are also facing difficulties. Experienced staff at Telegraph Hill School, formerly Hatcham Wood School, in south London face so much disruption that many want to leave. But Blunkett is pressing ahead with more threats to close schools. He is defending grammar schools while blaming teachers in comprehensives, claiming they are “using deprivation as an excuse”.

But even a report from the privatised schools inspectorate, Ofsted, found last week that schools are underfunded. It stated that deprivation was the single biggest factor shaping children’s achievement.

TEACHERS AT a sixth form college in York have secured a victory after a series of one day strikes over their pay. The teachers, who are members of the NASUWT, ATL and NUT unions, decided to strike when the management attempted to put the date of their pay rise back by three months. This would have brought their pay deal in line with college staff at the FE site they recently merged with. Now management has been forced to backdate the pay of all teaching and non – teaching staff at both sites.

Parents roasted the council’s Labour chair of education, who was at the meeting. It was the second meeting of such a size in two weeks. Parents are angry and worried about the lack of places available in local secondary schools.

At Bacon’s City Technology College in Surrey Docks 870 children have applied for just 180 places. Parents agreed to attend the next education committee meeting, on 28 March at 6pm at Peckham Town Hall. Transport will be available at Marden Square TA Hall, off Drummond Road, Bermondsey, SE16, to ferry people to the town hall.

How police seized anti-war material in raid on Leeds bookshop 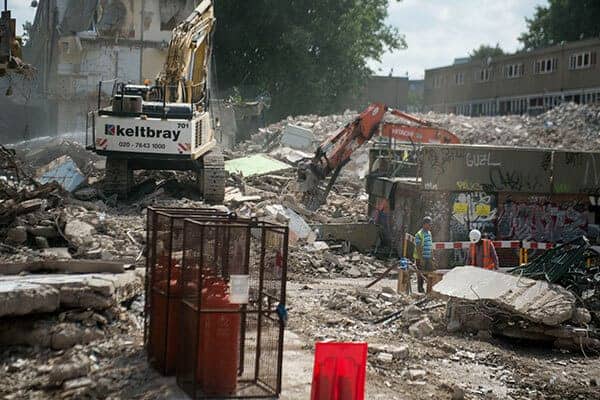