This article is over 9 years, 7 months old
The racist EDL failed to deliver the monster demo they had promised for last Saturday in Rochdale.
Downloading PDF. Please wait...
Tuesday 12 June 2012

The racist EDL failed to deliver the monster demo they had promised for last Saturday in Rochdale.

Instead they bussed in 300 racists who chanted drunken abuse outside the Yates’s pub.

The police arrested 11 of them. Despite this the officer in charge said, “It is testament to the organisers themselves who worked with us to ensure the event passed off as peacefully as possible.”

Local people are determined not to let the racists divide them. A chippy even donated bags of chips to the counter demo against the EDL organised by Unite Against Fascism (UAF) and local anti-racists.

Samaira Anjum is a member of NUS black students campaign and goes to Manchester Metropolitan University. She told Socialist Worker, “The EDL are trying exploit what happened and whip up Islamophobia. They want to criminalise a whole community.

“When I was growing up in Oldham the BNP were organising. When I was ten we got a petrol bomb thrown at our house when I was there.

“I have had people try and tear off my headscarf. But I’m not scared, I stand tall. It’s important that UAF is standing up to them.” 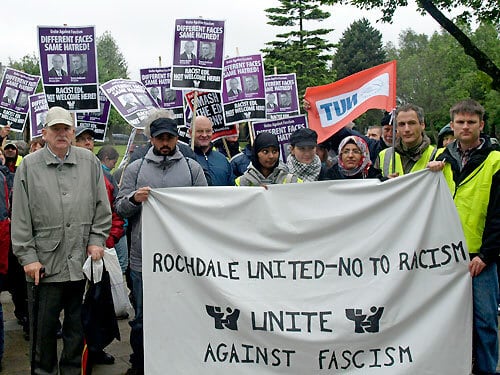 Rochdale: pride and unity in a town ravaged by the recession