This article is over 9 years, 11 months old
Romanian Roma and others gathered at the Hyde Park Holocaust Memorial in central London on Friday two weeks ago.
Downloading PDF. Please wait...
Tuesday 14 August 2012

Romanian Roma and others gathered at the Hyde Park Holocaust Memorial in central London on Friday two weeks ago.

They were there to remember the murder of thousands of Roma in the Auschwitz concentration camp on 3 August 1944. The Nazis killed some 500,000 Roma in the Holocaust.

The Metropolitan police have brought in ten special officers from Romania to make fortnightly sweeps of the Marble Arch area near the memorial, to “engage, disrupt and deter” Roma from the city’s streets.

Hundreds had been rounded up, or had their belongings destroyed in the run up to the Olympics. London’s Evening Standard newspaper called Roma beggars “disgusting” and a menace.

There has been an upsurge of racist and fascist anti-Roma violence across Europe. In Bulgaria five days before the anniversary, Malin Iliev, a candidate of the Euroroma Party, died of the injuries he received in a bomb attack.

In Paris the police have just pulled down more makeshift homes and in Ostrava, Czech Republic, 40 families face imminent eviction.

The time has come to get out in the streets and physically demonstrate our opposition. The next big opportunity will be Roma Nation Day, on 8 April 2013. 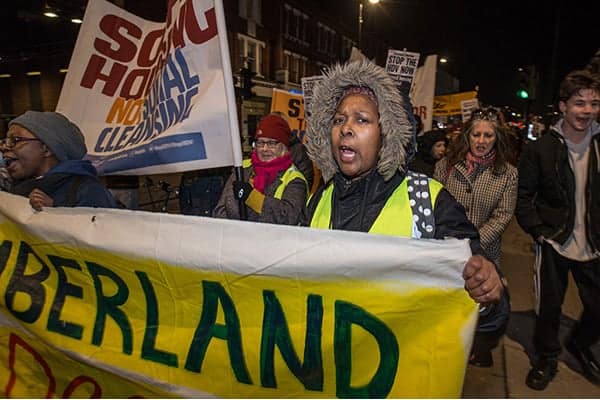