This article is over 17 years, 3 months old
Rose Gentle is the mother of soldier Gordon Gentle, who was killed in Iraq last year. She has campaigned for British troops to be withdrawn from Iraq and helped set up Military Families Against the War.
Downloading PDF. Please wait...
Saturday 12 March 2005

Rose Gentle is the mother of soldier Gordon Gentle, who was killed in Iraq last year. She has campaigned for British troops to be withdrawn from Iraq and helped set up Military Families Against the War.

I wanted to get into the Scottish Labour Party conference to hear what was said about Iraq. I phoned to ask whether I could come in and was told to bring some ID. I didn’t give my name that time.

I phoned again and told them my name and that I was from Military Families Against the War. They said there was no way I would get in.

I don’t see why I couldn’t go in — after all Gordon did serve in the British army under this government. It was all because it was me — because I have been outspoken about what has happened. The Labour Party didn’t want me in. A lot of people have been very annoyed that I didn’t get in.

I went and joined the demonstrators outside the conference. I got a better welcome there.

After Tony Blair left the Scottish Labour Party conference he went to another meeting. I went there too and shouted to him, “Mr Blair, when are you going to meet me?”

He just turned his head and walked past. He’s a coward. He won’t meet me. I’ve got a lot of questions I’d like to ask him, like why did my son only get six months training before he was sent to Iraq and why did he send the boys in there.

People have been stopping me in the streets to say well done for my campaign to bring the troops home. Just this morning a young girl jumped out of her car, shook my hand and told me to keep going.

I have been getting messages of support from everywhere. I get around 30 emails a day from soldiers and other people. I have spoken to soldiers and their parents, who have been supportive.

I’m worried Blair will send the boys into Iran or Syria next. We have to keep putting the pressure on. I am doing meetings to get people out on Saturday 19 March. I’m saying that we can’t give in to Blair and we can’t vote for him.

I will be there to protest when George Bush comes to Scotland for the G8 summit in July as well.

Ray Hewitt joined the army when he was 16 and fought in the first Gulf War. He is refusing to fight in Iraq and issued this statement.

My illusions of war being glorious were shattered in 1991 as I stood in the killing fields of Iraq. The true horror of war is difficult to describe. Every day our artillery would pound the Iraqi positions with high explosive shells while our planes dropped cluster bombs on them.

We would then drive through what was left. Dead and dying Iraqi troops littered the battlefield. Charred corpses hung from the turrets of destroyed tanks and twisted and broken bodies lay where machine-gun fire had cut them down.

I carried these images home with me and soon began having nightmares. A year after the war I left the regular army.

When Blair and Bush declared their intent to wage another war I was deeply suspicious of their claims about Saddam’s weapons and the threat Iraq posed to us. I believed every last chance for peace should be exhausted.

Now the war has been exposed as a lie. There are no WMD, 85 of our service personnel have been killed and over 700 wounded. Prisoner abuse and massive civilian casualties have fuelled hatred against the occupying armies.

I can no longer sit in silent frustration. This is why I have become a conscientious objector and will no longer serve as a reservist in the army.

There are some who believe my actions are those of a coward, but I believe the courage of our servicemen and women deserves more than deceit and spin. I cannot be any part of a war that insults their bravery while demanding so much of it. It is time to bring the troops home.

For more on Military Families Against the War go to www.mfaw.org.uk 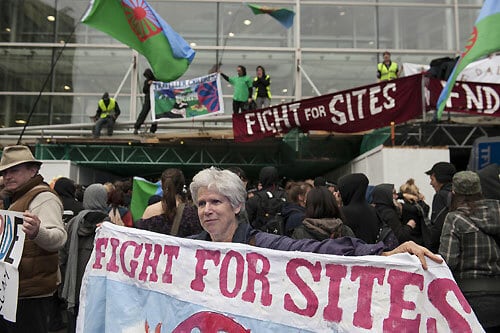