Rot runs deep in scandal of MPs for hire

This article is over 12 years, 4 months old
Three more "cab for hire" MPs have been caught on the take.
By Tom Walker
Downloading PDF. Please wait...
Tuesday 30 March 2010

Three more “cab for hire” MPs have been caught on the take.

Former Labour ministers Adam Ingram and Richard Caborn are accused of offering to trade their contacts for cushy lobbying jobs, charging up to £2,500 a day “plus expenses”.

Ingram even boasted that he could draw on a pool of out-of-work ministers who were for hire for similar fees.

Meanwhile Tory MP Sir John Butterfill told the cameras he would “quite likely” soon be made a lord and would have more influence to sell. He asked for £35,000 a year.

Butterfill is disgraced after he built “servants’ quarters” on his mansion using MPs’ expenses.

Former Tory leader Michael Howard was almost trapped too—but he was warned off at the last minute.

He replied to an email from the fake firm run by undercover reporters, saying, “perhaps it would be a good idea for us to meet for breakfast”.

“I should perhaps mention that I have also been approached by another company in your field,” he added.

He “withdrew his interest” after he learned about the sting.

From expenses to lobbyists, we are seeing more clearly by the day that parliament is kept afloat by the cash of the rich. 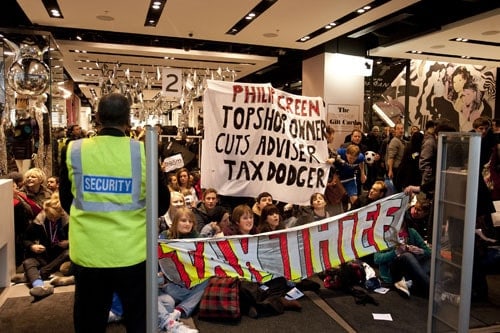 School swept up in the struggle