Teachers at Copland Community School in Wembley, west London, struck on Tuesday of this week against plans to turn the school into an academy.

The walkout was the fifth strike by NUT, NASUWT and ATL union members at the school.

Teachers at a Rotherham special school were set to strike on Thursday of this week to start rolling action against compulsory mass job losses.

NUT teachers’ union members at Abbey School in Kimberworth voted unanimously to strike after all 18 teachers were threatened with redundancy.

Strikes are set to take place for two days next week and three the week after.

A planned restructure introduced by a new executive headteacher  also threatens six teaching assistants in the GMB union which is considering action.

Staff are also being forced to reapply for their own jobs.

Teachers at the school are united in their determination to stop the upheaval this restructure will cause.

“The children we teach deserve better than this,” said teacher Pat McLaughlin. “We have many years’ experience teaching students in special schools, as well as specialist training, and that will be lost.”

Ads for some of the new senior posts have already appeared on the Rotherham Borough Council web site indicating that special school experience is not essential.

Teachers at Dukeries Academy in Nottingham began a two-day strike on Tuesday of this week as part of a national campaign to defend teachers.

Strikers are members of the NASUWT union.

The union, along with the NUT, is currently taking national action short of a strike in protest at attacks on teachers’ pay, pensions and conditions.

The union said strikes were called after management’s “unacceptable response” to the action short of a strike.

Teachers plan to strike on Tuesday, Wednesday and Thursday of next week.

Send messages of support for the strike to [email protected]

Walkout over observations in Leicester

Teachers at Gateway Sixth Form College in Leicester struck over lesson observations on Tuesday of this week. The workers are in the NUT union.

Teachers say a new observation policy imposed last year could lead to them being observed at least three times a year with little or no notice.

Teachers were set to strike again on Thursday of this week, and on Tuesday, Wednesday and Thursday of next week.

NASUWT union members at Birchgrove Comprehensive School in Swansea were set to strike on Thursday of next week. Further walkouts are planned for 6, 18, 19 and 20 February. Send messages of support to [email protected]

Labour Party and Green Party members also protested, along with members of Stroud Against the Cuts.

Demonstrators were angry at Gove’s changes to the school curriculum and at plans for a free school in the area.

Year 13 student Connie Gleeson said, “It is really unfair that our whole lives are now going to be determined by one exam and one day.”

NUT executive to consider next steps

The national executive committee (NEC) of the NUT teaching union was set to hold an emergency meeting on Thursday of this week. This will consider the next steps in an ongoing campaign to defend teachers’ pay, pensions and conditions.

Socialist Worker supporters on the NEC will be arguing for a series of strikes to stop Tory education secretary Michael Gove’s attacks on teachers. 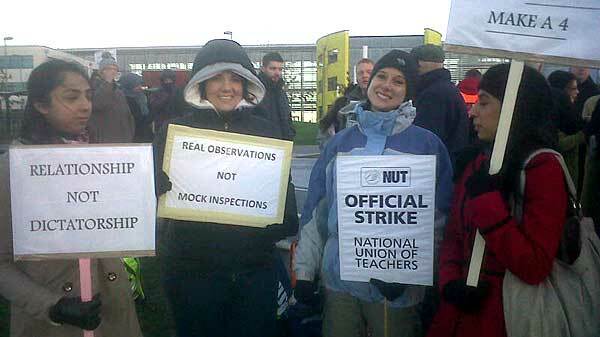