This article is over 12 years, 5 months old
Royal Mail bosses are on the rampage against the CWU postal workers’ union, but they face growing resistance.
By Yuri Prasad
Downloading PDF. Please wait...
Tuesday 18 August 2009

Royal Mail bosses are on the rampage against the CWU postal workers’ union, but they face growing resistance.

Management is preparing a mass cull of jobs, tearing up workers’ conditions, and attempting to break any fightback.

No area of the country is safe from the assault. From Bristol and south west England to Edinburgh and the east of Scotland, there is a concerted attempt to drive the union out and force workers to perform any task at any time.

Bosses are also threatening to slash the pay and rip up the working patterns of the thousands of network drivers who operate from mail centres across Britain.

Royal Mail management has taken “executive action” – the imposition of cuts without agreement with the union – at several delivery offices and mail centres across London.

In some delivery offices over a third of jobs have been “deleted”. And bosses are planning to extend these attacks to a further 28 workplaces.

The situation in Wimbledon, south London, is typical.

Bosses there are demanding “total flexibility” from workers, insisting that 30 drivers convert to delivery duties whenever required.

“This is a prelude to job cuts,” says Greg Charles, branch secretary of the CWU union for London South West.

“By pushing through ‘flexibility’, management hopes to get rid of staff and marginalise the union. They know that this sort of change is supposed to be negotiated with us, but they are deliberately provoking confrontation.”

Bosses have stopped paying five drivers who have refused to comply with their demands.

Greg describes the situation at the offices as “extremely tense”.

Workers initially planned to walk out unofficially but have reluctantly been persuaded not to – but only because there is official strike action in London and a national strike ballot starting next month.

“We’re holding the line for now,” says Greg. “But there’s only so much that people can take.”

A wave of local action is set to continue this week.

Workers at Stoke mail centre – who are taking all-out strike action (see » Indefinite post strike shakes the bosses) – were to be joined by postal workers taking action in Coventry and elsewhere in the Midlands.

Most of London’s postal workers and all network drivers are to strike on Wednesday. A variety of delivery offices in the east of England are planning action between Thursday of this week and Monday of next week.

It is vital that union activists turn the huge anger with Royal Mail into a massive vote in favour of a national strike in the ballot that will start in early September.

In order to win the vote it is essential that every management attack is met with determined resistance.

Workers cannot simply wait for action in six weeks’ time. There is a serious danger that by the time the national ballot result is announced, management will have already pushed through many attacks.

Pressure for unofficial strike action in response to the provocations is growing as it becomes clear that bosses are planning to ramp up the pressure.

Network drivers, who move huge volumes of post to mail centres around the country, stand to lose hundreds of pounds a month if management get away with imposing changes to their conditions on 7 September.

Many activists believe that this could be a trigger for a wave of unofficial strikes.

“Some of our drivers will lose up £600 a month,” said one union rep in the Midlands, who cannot be named because of management threats.

“And it’s not just about money. People build their lives around their shifts, and now managers want to be able to choose who does what and when by pulling names out of a hat.

“Over 1,000 drivers will be taking official strike action this week, and at my mail centre we are planning a determined picket – we plan to prevent anything coming in or out.

“If the picket is effective, we will stop an enormous amount of the country’s mail and perhaps Royal Mail will have the sense to get around the table with the union.

“But if they don’t – well, the gloves are off aren’t they? The time will have come for us to go out unofficially and the normal rules will be out the window.”

The CWU’s national headquarters continues to be deluged with demands for local strikes.

But union leaders told a national briefing last week that they won’t consider any more because the national ballot is on the way.

Some senior union officials are using the ballot as a way to dampen down action.

One postal worker from east London told Socialist Worker that they believe this strategy is “disastrous”.

“The attacks are already coming thick and fast,” the worker said. “What do they think will happen when we suspend our action? It’s obvious.

“Management are going to seize the moment to launch further attacks while we’re tying our hands behind our backs.

“We’ve already had a taste of this in east London. Around 40 percent of our work has been diverted to offices around the country in punishment for some unofficial action that took place in the spring.

“As a result our people have lost all their overtime – which lots of us depend on, given how low our basic pay is.

“We’ve got delivery workers being bullied into accepting taking on bits of delivery rounds miles away from where they normally work.

“And we’ve got drivers being sent to sort mail without any training.

“This so-called ‘flexibility’ will end up with hundreds of job losses, people being bullied to work harder to make up for sacked colleagues, and a drop in wages.

“We cannot allow management to have the initiative over this. We need national action, but we can’t wait until October for it to arrive. We need a nationwide unofficial strike.”

Many leading rank and file activists who share this view worry that if they win unofficial action in all or part of their area, their strike might find itself isolated and without national support.

A branch secretary in the south of England told Socialist Worker that although he shared this concern – particularly after a string of unnecessary defeats for the union since the end of the 2007 pay dispute – the rash of local disputes show a great willingness to fight.

“You can tell from the fights that are going on in many parts of the country that the post is a tinderbox at the moment,” he said.

“It may be a daunting prospect, but someone has to go first – otherwise Royal Mail is going to get away with the kind of attacks that could demoralise our activists and make winning the national ballot more difficult.

“Those of us who understand that is vital that we are prepared to go unofficial have to get organised.

“We need a network, we need to co-ordinate – and when the time comes, we’ll have to stick our necks out.” 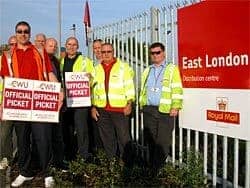