The CWU union has announced it has reached an agreement with Royal Mail after weeks of talks.

The post has been privatised and Royal Mail bosses want to make it a company driven in the pursuit of profit to benefit shareholders.

The CWU has been in dispute with Royal Mail over protecting workers’ terms and conditions.

The union’s postal executive agreed to recommend the new deal. Some have hailed it as a success as Royal Mail has been forced to retreat.

The agreement now says workers have five years protection on pay and job security, and a 9.06 percent pay deal over three years. Workers are also getting £200 over Christmas.

Post workers will welcome the extra money in their pay packet.

“But parts of the agreement are pretty appalling,” one post worker based in Cambridge’s mail centre, told Socialist Worker.

“The fundamental problem is still deliveries. The agreement talks about bringing in a review over allegations of bullying and harassment, but also about effectively increasing workloads.

“Royal Mail have a lot of get-out clauses. They seem to have everything they wanted.”

The agreement talks of “building a climate of sustainable trust with a can do culture” and “improving efficiency”. This means increased workloads, and more pressure and stress for workers.

It will only benefit the bosses. And as workloads increase, so will bullying and harassment by management.

More worryingly Royal Mail can withdraw the agreement under what it calls “exceptional circumstances”.  One of these is if the union calls a national strike.

The current agreement will be reviewed again in 2019, so this is effectively a no-strike deal for five years. Signing away the ability to strike would be very damaging to the union. The threat of a national strike forced Royal Mail to the table.

Leaving workers without this option will be disastrous. It stifles the union’s power.

The agreement will be put to a membership vote in January. Post workers should meet now to discuss all aspects of the agreement. And they should campaign to reject the deal in January.

Workers in Crown Post Offices have begun a timetable of rolling strikes set to last for three weeks.

Workers will walk out at 12.30pm until closing time from Mondays to Thursdays. On Fridays strikes begin at 3pm and on Saturdays workers will strike for the whole day.

Workers in the south region struck on Monday of this week. They were set to strike again on Thursday of this week, and Tuesday, Friday and Saturday of next week.

Those in the central region struck on Tuesday of this week.

They were set to strike again on Friday and Saturday of this week, and Wednesday of next week.

And workers in the north region were set to strike on Wednesday of this week and Monday and Thursday of next week.

Some 140 post workers in Wimbledon walked out on unofficial strike last week. It took place after bosses sacked two workers on the spot for allegedly leaving post unattended.

The offices on strike covered the S19 and SW20 area. Bosses brought in scabs to try to break the strike, which took place on Monday and Tuesday of last week.

The strike was called off after bosses agreed to bring a hearing for the sacked workers forward. 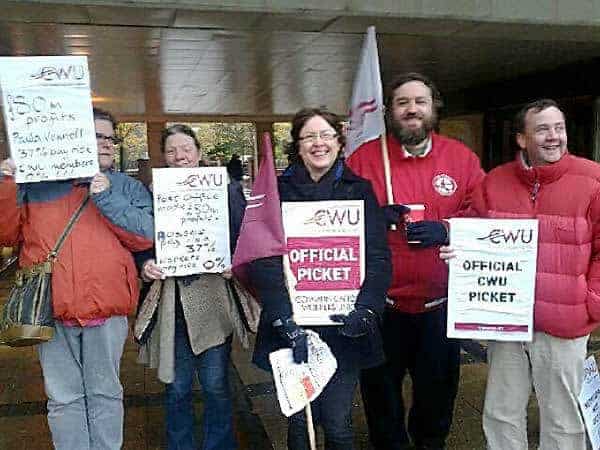 No-strike deal at Royal Mail would be a disaster