This article is over 16 years, 4 months old
The workers sacked by multinational caterers Gate Gourmet quickly became a rallying point for everyone who is sick of long hours, low pay and an endless race to the bottom under New Labour.
By Kevin Ovenden
Downloading PDF. Please wait...
Saturday 27 August 2005

The workers sacked by multinational caterers Gate Gourmet quickly became a rallying point for everyone who is sick of long hours, low pay and an endless race to the bottom under New Labour.

Reports from workplaces across Britain, and an unprecedented number of e-mails of support, show their experience of being contracted out to a ruthless union-busting employer is tapping a seam of bitterness among millions of working people.

As Socialist Worker went to press Gate Gourmet bosses were in talks with British Airways (BA). They were threatening to put their company into administration if they were not rewarded by the airline for summarily sacking 670 workers.

Tony Woodley, general secretary of the workers’ T&G union, said on Monday of this week, “They have clearly worked to a cynical plan to sack their workers and, we have been told by one director, have always had a plan to go in and out of administration.

“That means writing off the costs of pensions, redundancy payments and other liabilities, all at the expense of a hard working, low paid, predominantly Asian female workforce.”

He called on BA to take the catering workers back in-house, if only as a temporary measure. That would run against New Labour’s neo-liberal drive for more outsourcing.

“The talk inside the airport is that the fate of the Gate Gourmet workers awaits you if outsourcing is allowed to continue apace,” says one BA worker at Heathrow. “That’s one reason why BA ground staff took such powerful action in solidarity at the start of the dispute.”

BA, which all the evidence suggests collaborated with Gate Gourmet’s sacking plan, is now attempting to intimidate and victimise T&G reps.

It has set up a “confidential hotline” to try to get anonymous “evidence” for use against the reps it holds responsible for organising solidarity action.

“The BA workers need to know they have got the support from the same trade unionists who have backed us,” says one sacked Gate Gourmet driver.

“It was their action that made our case a national issue that hit the news around the world.

“The union should just face down all the threats. If we got action back on inside the airport, across BA and other companies, it would force BA to end this quickly in our favour.

“There’s talk of the union finding a compromise. But I don’t see how we can compromise — we want our jobs back, the company wants to treat the workforce like slaves.”

Mr Sandhu, a senior Gate Gourmet shop steward, says, “What’s happened to us exposes the unfairness of the law. It is perfectly legal for Gate Gourmet to sack us at a moment’s notice.

“But it’s illegal for other workers, who we worked alongside, to take action to support us.”

That is thanks to Margaret Thatcher’s anti-union laws, preserved for the past eight and a quarter years by Tony Blair.

Speaking at a rally in support of Bristol Rolls Royce union convenor Jerry Hicks, RMT union general secretary Bob Crow last week said the fight to overturn those laws was bound up with the fights against union busting at Rolls and Heathrow.

He raised the prospect of Gate Gourmet and Rolls Royce workers spearheading a lobby of the TUC Congress in three weeks time to argue for confrontation with New Labour.

Government ministers were reportedly privately putting pressure on “all sides” to resolve the dispute this week.

“Why aren’t they just putting pressure on the company?” asked one sacked catering worker. “Why are they pressuring the union to compromise? We haven’t done anything wrong.”

One worker, whose wife has also been sacked by Gate Gourmet, said, “It’s not too bad for me, but some of the younger workers have huge mortgage repayments. We need the financial and moral support to pour in.”

A driver added, “I’m 38 and have two kids and a mortgage. The pay cuts Gate Gourmet wanted to impose before we were sacked would cost me £75 a week. 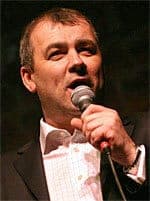 Labour backtracked on legislation that would stop agency scabs