This article is over 13 years, 6 months old
Firefighters working for Grampian fire and rescue service have voted to ballot for strike action after a colleague with 22 years of experience was sacked for being overweight.
Downloading PDF. Please wait...
Tuesday 22 July 2008

Firefighters working for Grampian fire and rescue service have voted to ballot for strike action after a colleague with 22 years of experience was sacked for being overweight.

Kevin Ogilvie, based in Aberdeen, was dismissed earlier this month. The FBU union says he could easily have been deployed to a non-frontline role, but managers have refused him this option. They are also refusing to allow Kevin an appeal.

Alan Paterson is brigade secretary of Grampian FBU. ‘Kevin’s case is only the start of a much wider attack on our employment procedures,’ he told Socialist Worker. ‘We have procedures and policies that read very well on paper, but they just aren’t being followed.’

He adds that the union strongly suspects that management have decided to single out Kevin – who just happens to be an FBU branch official – in order to set a precedent over the ‘capability’ of firefighters.

‘They’re desperate to get someone sacked on grounds of ‘incapability’,’ said Alan. ‘It’s been management’s flavour of the month for some time now.’

The idea is to use intentionally vague standards of ‘capability’ as a means of hiring and firing firefighters at will – thus bypassing normal disciplinary procedures.

Last week a meeting of around 80 firefighters voted unanimously to ballot for industrial action over Kevin’s case. If the dispute is not resolved they could strike in late summer.

Don't Argos it, strike for pensions! 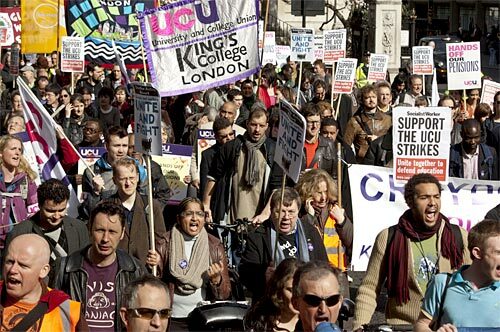