This article is over 12 years, 8 months old
Members of the University and College Union (UCU) in higher education have received ballot papers asking them to vote for strike action and action short of a strike.
By Sally Hunt, UCU general secretary
Downloading PDF. Please wait...
Tuesday 05 May 2009

Members of the University and College Union (UCU) in higher education have received ballot papers asking them to vote for strike action and action short of a strike.

We feel we have been left with little option but to ballot members over industrial action as the employers refuse to acknowledge the scale of the crisis hitting higher education jobs.

Our own intelligence tells us that many universities are looking to use the current economic woes as a reason to axe staff.

The employers have confirmed that around 100 institutions are “actively considering staffing reductions” – job losses to you and me.

However you dress it up, it’s clear that the scale of job cuts is substantial.

Every UCU member, whatever type of institution they work in, is potentially vulnerable as current proposals for cuts at institutions as varied as the universities of Liverpool, Reading, Hertfordshire, and London Metropolitan show.

Institutions are announcing planned redundancies and failing to make any kind of argument as to why they are necessary.

We have called on the employers to come to a national agreement with us that will ensure any institution considering redundancies has a due and transparent process to go through.

This will stop any repeats of the situations we have seen at some institutions where plans are rushed through.

There was a sorry farce at Lancaster, where the senate voted against a redundancy programme, only to see their decision overruled by the council.

We do not believe that slapdash redundancy packages, opposed by the majority of the academic community but forced through by vice-chancellors, are in the best interests of our universities.

At London Metropolitan University 550 posts – one in four jobs – are at risk.

At Cardiff University 140 members of staff, mainly women, working in the Lifelong Learning Centre face losing their jobs. Management thinks they are too expensive now an equal pay claim has been agreed.

In both cases courses will be cut and those who remain will see their workload increase.

This brings us to the issue of voluntary redundancies. They have a huge impact on workload for those who remain.

Class sizes rise because there are fewer staff, and student numbers are increasing.

The situation at London Met came to a head when the university said it was pushing ahead with a voluntary redundancy scheme. This gave no guarantee that staff who did not sign up would not be sacked anyway.

That announcement, incredibly, was made during talks designed to avoid redundancies.

The issue of jobs in higher education is not just a UCU issue, as our colleagues in the Unison union quite rightly said last week.

However, the initial response from the employers’ UCEA body to our request for urgent talks was a letter suggesting our members be “patient”.

That level of complacency is letting down the sector. It demonstrates just how far removed those at the top are from the reality at the chalk face.

Let’s not forget that the people seeking to force through redundancies are the vice-chancellors who recently failed to justify their own exorbitant pay rises.

These saw them trousering around twice what they begrudgingly paid their staff.

It is the failure of those vice-chancellors to react to the growing crisis that has forced our hand.

We need to get an agreement sorted now to stop a wide-ranging cull of academic jobs without proper alternatives being considered.

It is the urgency of the situation that has led to us balloting members. It will be the intransigence of universities that leads to any industrial unrest on our campuses this year. 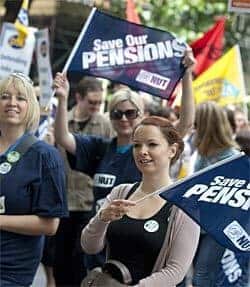 Activists say: we’re all part of the same fight