This article is over 11 years, 3 months old
Locked out construction workers at Saltend in Hull have resumed their protests.
By Simon Basketter
Downloading PDF. Please wait...
Tuesday 26 April 2011

Locked out construction workers at Saltend in Hull have resumed their protests.

The Saltend site is the second biggest construction site in Britain after the Olympics. A huge company, Vivergo Fuels, runs it. BP, British Sugar and DuPont own it.

The dispute began when Vivergo cancelled a contract with Redhall Engineering Solutions, the subcontractor that had employed the workers.

The bosses refused to transfer them to a new contractor.

After a number of weeks of protests against this, the pickets were lifted to enable talks to take place.

The bosses offered workers a bribe to go away. This was rejected at a mass meeting on Thursday of last week.

Keith Gibson, a locked out worker, told Socialist Worker, “This is the longest dispute I’ve ever been involved with, and the most serious.

“Vivergo tried to pay workers off—with no guarantee that they would get their jobs back. The work would be split up between different contractors and workers would have to bid for it.”

A national shop stewards meeting was called off by the unions last week, but it is set to go ahead on Wednesday of this week.

Keith told Socialist Worker, “We’ve got this meeting in York with the Unite and GMB unions. We’re going to argue that we go back to the sites with a date for a one-day strike.

“That strike would include construction sites and refineries—it could include up to 8,000 workers.”

Meanwhile, the GMB is preparing to launch a legal challenge against Humberside Police after around 50 officers, some on horses, used what the union called “heavy handed” tactics against workers outside the plant.

Les Dobbs, a GMB organiser, said that the union is considering this because of “an unreasonable use of Section 14 of the Public Order Act”.

More than 100 delegates to the NUT teachers’ union conference attended a fringe meeting to hear Keith Gibson speak last week. Teachers showed solidarity by donating over £400 to the workers at the conference.

The lesson of the past week is that militancy is the key to the dispute, not talks with management.

Solidarity, and militant industrial action, can win the dispute. If the officials won’t call out other sites, then action should be taken unofficially. 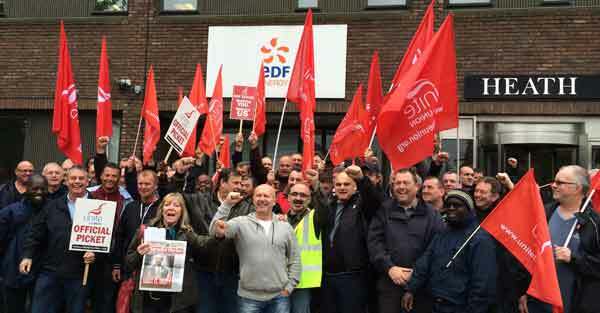