This article is over 18 years, 1 months old
The US attack on an Iraqi town last week revealed all the savagery, lies and desperation of the disastrous occupation
Downloading PDF. Please wait...
Saturday 06 December 2003

US OCCUPATION military authorities told the world’s press they had ‘killed 46’ resistance fighters in the central Iraqi town of Samarra on Sunday.

Within 24 hours the truth began to emerge. Local hospital officials said they could account for eight dead, and most were civilians.

One was a 71 year old Iranian pilgrim, Fathollah Hejazi, who was visiting an ancient Shia Muslim mosque in Samarra. Another was a woman who worked in a local pharmaceutical factory.

Ambulance driver Adnan Sahib Dafar pointed to a body on a steel tray and asked journalists, ‘Is this woman shooting a rocket-propelled grenade? Is she fighting?’

Among the 54 injured was Ali Abdullah Amin, a child who was shot with his father outside a mosque. His father was killed.

Even Samarra’s US-appointed police chief Mahmoud Mohammed said the US forces had ‘provoked’ the town. They had already attacked it six months ago, killing unarmed guests at a wedding.

The police chief said that last Sunday US troops again ‘fired randomly’ after they had been ambushed by ‘one or two people’.

‘Were the French happy under the Nazis?’ he asked. ‘It is the same thing here.’

The slaughter at Samarra, as elsewhere, has turned even people who were prepared to put up with the occupation into ardent opponents of the US, Britain and their allies.

Latest killings are an echo of Vietnam

IT IS now clear that far from fighting some kind of ‘heroic battle’, US forces entered Samarra, came under some small arms fire and then panicked, firing off artillery and weapons in all directions.

The US military then exaggerated the number of people killed and claimed they were all fighters, thus presenting the butchery in the town as a ‘successful military engagement’.

This is precisely the pattern the US authorities developed in Vietnam-lying about civilian casualties and coming up with ‘body counts’.

These estimates of killed ‘combatants’, if true, would have meant the US winning the war five times over.

The US is breeding the same murderous attitude among their troops in Iraq. US military policeman Jack Craig told journalists how he interpreted his ‘strike first orders’.

He said, ‘Actually, I see ‘hearts and minds’ as a tactical doctrine. To me it means that’s where we should aim first. Shoot them in the body or the head, but just make sure you shoot them first.’

A US civilian official in the Kurdish north of the country admitted troops were orchestrating confrontations with civilians. He said of one soldier, ‘Every day he complains he has not yet had the opportunity to kill an Iraqi.’

It is no surprise that the most scientific survey of opinion in Iraq, published on Monday, found that 79 percent of people have ‘no confidence’ in US and British forces. 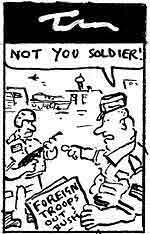 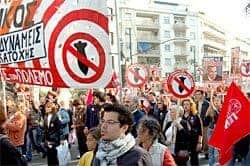 Hundreds of thousands march against war across the world