This article is over 11 years, 2 months old
Protesters are set to shut down Vodafone shops across the country tomorrow (Saturday) over the scandal of the corporation legally avoiding £6 billion of tax.
Downloading PDF. Please wait...
Friday 29 October 2010

Protesters are set to shut down Vodafone shops across the country tomorrow (Saturday) over the scandal of the corporation legally avoiding £6 billion of tax.

The phone firm was let off the tax bill by the government – even though the cash is almost as much as the Tories’ cuts to the benefits budget in last week’s brutal spending review.

The protests started on Wednesday when up to more than 50 activists gathered in London for a secret anti-cuts protest.

It turned out to be a blockade of Vodafone’s flagship store on the city’s Oxford Street, which kept the shop closed for business all day.

Then on Thursday activists in Leeds stepped up the protests, shutting down all three Vodafone stores in the city centre with a ‘flying picket’.

This Saturday hundreds are expected to gather in London’s Hyde Park to launch more blockades across the capital.

The expected size of turnouts in other towns and cities is not known – but could be surprising.

Many of the protest plans have spread on social networking website Twitter with no central organisation. All are backed by the Right to Work campaign.

The more we can highlight Vodafone’s legal tax dodge, the more stupid the Tories will look the next time they try to claim that ‘we’re all in it together’.

Brighton: 12 noon at The Level, to coincide with anti-cuts march

Edinburgh: 11am at the Vodafone store on Princes Street

Glasgow: 8.30am at All Saints, Buchanan St

Hastings: 11am, anti-cuts march assembles in the town centre. Vodafone shut-down planned for afterwards at 12.30

Liverpool: 11am in Clayton Square

Weymouth: 1.30pm outside the Vodafone store

Send your reports and pictures to [email protected] 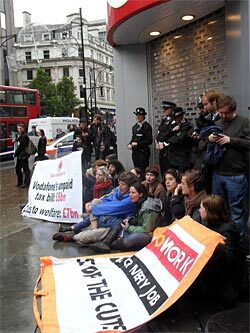 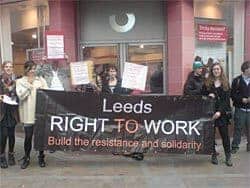 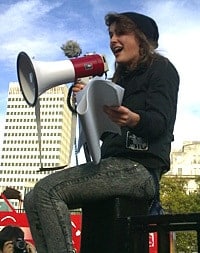 Reports from a national day of protest against Vodafone 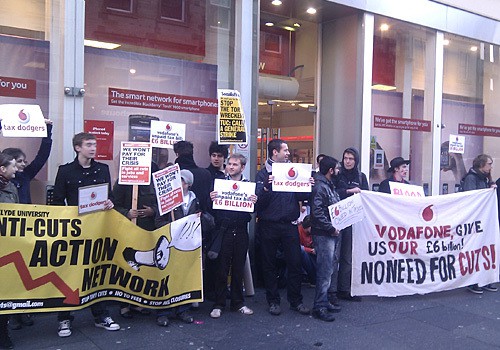