They met to organise their next action after last Saturday’s thousands-strong demonstration that surrounded the hospital.

Kershaw wants to close the hospital’s A&E department, its maternity, intensive care, medical, surgical and children’s wards, and to sell off its assets.

The Save Lewisham Hospital campaign is planning a “Converge on Kershaw” protest next week at the public consultation on the closure plans.

One student nurse proposed a joint day of action on 15 December involving all the south east London hospitals affected by Kershaw’s proposals.

Matt, a mental health support worker, said, “Union branches can twin with wards under threat—we’ve been putting up messages of support in the wards. But we need a trade union day of action. The NHS is one body—when they have a go at one bit, the rest suffers.”

Some people heckled Heidi Alexander over Labour’s introduction of privatisation into the NHS. But others argued that Heidi had started a petition against the cuts that thousands signed all over the borough.

John Lister from Keep Our NHS Public recently produced a study into A&E closures. He told the meeting that the public consultation ends on 14 December—when Kershaw will decide whether the public’s feedback is “useful” or not.

Kershaw’s final report will be made in January and on 1 February, health secretary Jeremy Hunt will make a decision that cannot be appealed.

Former A&E patients described how they had been saved by the fact that Lewisham hospital was nearby during an emergency. They also praised the quality of the care they had received.

One man said to huge applause, “I’ve had to use the hospital a lot for mental health and I don’t know where I’d be without it. It would be a crime if they take it away.” 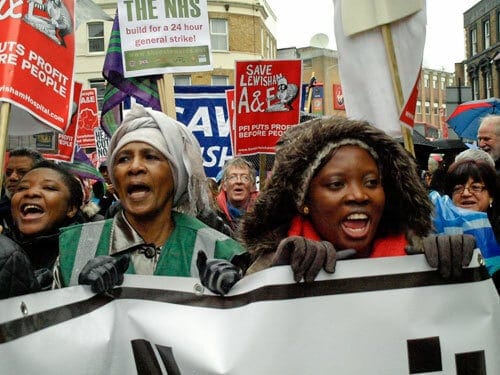