This article is over 18 years, 7 months old
PARENTS AND teachers at Crofton School in Lewisham, south London, have launched a campaign to stop 11 teaching staff being made redundant. Members of the National Union of Teachers (NUT) at Crofton are balloting for strike action. If the proposed job cuts go ahead, one in seven teachers at the school will be made redundant.
Downloading PDF. Please wait...
Saturday 17 May 2003

PARENTS AND teachers at Crofton School in Lewisham, south London, have launched a campaign to stop 11 teaching staff being made redundant. Members of the National Union of Teachers (NUT) at Crofton are balloting for strike action. If the proposed job cuts go ahead, one in seven teachers at the school will be made redundant.

Staff are very angry that they have worked so hard to get the school through a successful OFSTED inspection and are now being rewarded with job cuts. A lobby of the governors’ meeting is planned on Tuesday 20 May at 6pm and other local schools are being asked to build for it.

Action takes off at Heathrow

AROUND 120 workers staged two unofficial walkouts over production bonuses on the Heathrow Terminal 5 project two weeks ago. They were expecting to get £500 each for their work from 12 January to the Easter Bank Holiday. Their employer, CA Blackwell, gave them less than £20 each.

After a meeting on Tuesday of last week the production bonus has been replaced by an attendance bonus estimated at £60 a week. The TGWU union is considering a strike ballot over the issue.

SHIPYARD WORKERS on the Clyde and in Barrow have rejected a new pay deal offered by BAE Systems. Union leaders recommended the 3.2 percent deal. The Scotstoun and Barrow yards rejected the deal, while the smaller Govan yard accepted it. Bosses want to introduce a back shift at Scotstoun and sack 1,000 workers at Barrow.

MAGISTRATES’ courts workers in the Amo union in England and Wales rejected a 3 percent pay deal by 15 to one last week. In a turnout of over 50 percent, the vast majority of union members also said they were willing to take action for better pay.

AS PART of the Globalise Resistance Scotland tour to promote his new book, An Anti-Capitalist Manifesto, Alex Callinicos spoke to 60 people at an event in Edinburgh hosted by WordPower bookshop.

Earlier in the day he spoke in Glasgow and on Monday took the tour on to Dundee University and to St Andrews Byre Theatre.

PCS CIVIL service union members in the British Museum last week discussed their campaign against management plans to cut security staff by over 20 percent. The British Museum has a £6.5 million deficit. Government funding has declined by 30 percent in the last ten years. Workers struck in June last year against 15 percent staff cuts. 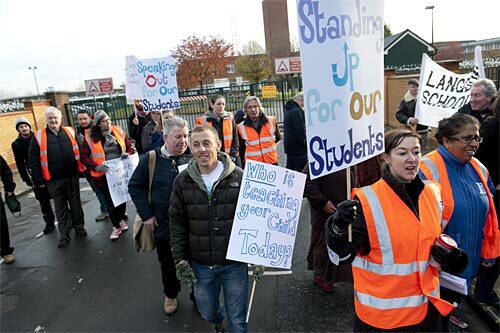