Schools to strike in three battles over the future of education

This article is over 14 years, 2 months old
Students walked out of Withins School in Bolton on Tuesday of this week in protest at their school being sold-off and turned into an academy.
Downloading PDF. Please wait...
Tuesday 17 June 2008

Students walked out of Withins School in Bolton on Tuesday of this week in protest at their school being sold-off and turned into an academy.

An impressive 91 students had pledged to walk out but many were blocked by senior management.

The students said they supported their teachers who were planning to strike against the academy plans the next day.

They told the headteacher, who came out to patronise them, that their school was not failing and so should not be sold off.

The students hope to join their teachers on their picket line on Wednesday.

Members of the NUT teachers’ union at the Withins School in Bolton are to strike for a second day on Wednesday of this week over plans to transfer the school out of local authority control and turn it into an academy.

Opposition to the academy plans is growing across different unions in Bolton.

The Unison union is this week set to ballot its members at both the Withins and the neighbouring Hayward school over the plans.

If the ballot is successful, it could lead to the first industrial action by Unison members in Bolton against the transfer of their employer to the private sector.

Members of the NASUWT union in the Withins School are also considering a ballot for action.

The strike comes at a time when the government has stepped up its attack on education, last week classifying 638 schools as “failing” and threatening them with academy status – despite the fact that 26 of the schools on its list are already academies.

The roll of “failing” schools included Harrow High School – which was inspected by Ofsted in the very same week as the announcement and classed as “outstanding”.

The fight against increased workloads will see teachers at Lady Margaret Primary School in Ealing, west London, strike on Wednesday of this week.

Union activists say that management at the school want a reduction in the number of teaching and learning responsibility posts and have set unreasonable performance targets.

Further strikes are planned for Tuesday and Wednesday of next week.

Teachers at Pimlico School in central London were set to strike on Wednesday and Thursday of this week.

The strike takes place after lunch breaks were cut from 45 minutes to 30 minutes.

Following a one-day strike in February, workers were promised that the break would be restored to 45 minutes in June. But this has not happened.

“We were told that management would look at health and safety and consult us if the lunch break wasn’t to be restored,” Padraic Finn, secretary of Westminster NUT branch, told Socialist Worker.

“The attacks on our conditions are part of smoothing the way for Pimlico to become an academy.

“This is an attack on the union. But instead of dividing us it has had the opposite effect – teachers have united to fight the attacks.” 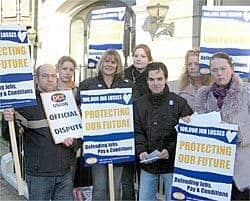