More than 250 people attended the launch of the People’s Assembly in Scotland last Saturday.

Actor Ricky Tomlinson received a standing ovation from the packed audience. He spoke about the battle for justice for the Shrewsbury 24 and called for coordinated protests in every city against the Tories.

Unite union chief of staff Andrew Murray outlined the scale of the social crisis caused by austerity. He said the new food bank in David Cameron’s Witney constituency showed the scale of food poverty in Britain.

Kevin McHugh of the PCS union’s national executive attacked the Tories’ “fiddled figures” about economic recovery. He said the march at the Tory party conference last October was good but said, “We can’t just march together, we have to strike together”.

Scottish TUC general secretary Grahame Smith said opposition parties must understand that we don’t want an alternative to austerity “that’s a little less of the same”.

She argued, “We need action on the ground. Everyone needs to get to the protest at the Tory party conference in Edinburgh on 15 March.”

There was anger at Labour Party politicians joining in the scapegoating of migrants and benefit claimants.

Anti bedroom tax activist Marion Nisbet told Socialist Worker, “We have to tackle the scapegoating of so-called benefit scroungers and migrants head on. The rich are the real scroungers.” 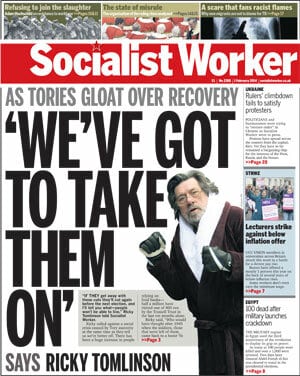