This article is over 11 years, 1 months old
Voters in Scotland have an opportunity to make a stand against the agenda of cuts of the four main parties in elections to the Scottish parliament on 5 May.
Downloading PDF. Please wait...
Tuesday 12 April 2011

Voters in Scotland have an opportunity to make a stand against the agenda of cuts of the four main parties in elections to the Scottish parliament on 5 May.

The Coalition Against Cuts is to stand a list of candidates in Glasgow, headed by former Respect MP George Galloway.

The Scottish government is to cut £1.3 billion from its budget. Glasgow council alone is to shed 3,500 jobs.

The big parties, including the SNP, are united in their commitment to cuts. But the Coalition Against Cuts stands against all attempts to make the poor pay for the crisis.

George Galloway told Socialist Worker, “We’re not getting into the business of saying, ‘Don’t cut that—cut that instead’. Scotland has already paid—in poverty, in unemployment, in lack of life opportunity. We’re not going to pay again.”

Angela McCormick, a member of the Socialist Workers Party and Solidarity and the EIS/FELA national executive, is second on the Glasgow list.

“This election is in the context of the huge TUC demo on 26 March,” she told Socialist Worker.

“We can have a strong voice in parliament, taking on whoever forms the government.

“We’ll raise the issues that would otherwise be ignored.”

The Solidarity party is also set to stand candidates across the rest of Scotland. 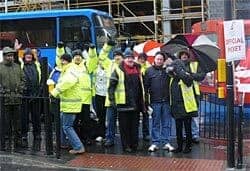 Local elections were not a great day for Tories and Liberals